This article is written by GCI pastor Mark Mounts.

My wife, Debra, and I recently had the opportunity to visit the “Holy Land” with a group of GCI church leaders. It was a life-changing journey we will never forget. The geography and the sites we visited gave us a new perspective into the ministry of Jesus Christ. We were particularly moved by the place where Jesus shared the Beatitudes with his disciples. (For a bit more on the geography, see my accompanying short feature: “Magdala and Capernaum.” 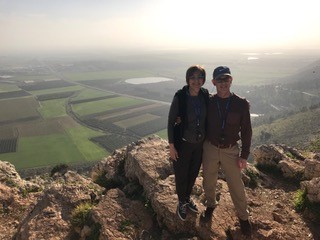 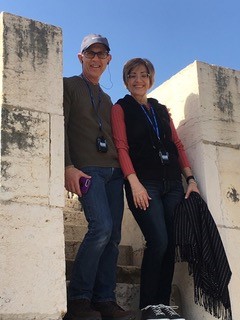 For the record, the speculation I will make in the remainder of this article is based on ideas expressed by our guide, and what I have personally considered since returning from the trip. So, for the sake of this article, please “play along.”

Jesus arrived during a time when Jewish residents in the Galilean area were expecting something big. In spite of the Roman rule, they had jobs, they were involved in trade and production of food and usable goods, but they expected more. They were expecting a leader—a Messiah—to rise up and start a political and religious movement that would eventually overthrow the Romans. Jesus had already performed a number of miracles, and many who were aware of his “great wonders” were asking, “Is this him?” “Is he the one?”

I suggest a main purpose of the Beatitudes was because Jesus was preparing the disciples for what they would face three years later and during their ministry. So, let’s start there, in the Garden of Gethsemane.

Just a few hours before he is to die, Jesus took Peter, James and John with him to Gethsemane to pray. There he pleaded three times with his Father that if there was another way, let it be seen. In spite of this overwhelmingly emotional experience that caused Jesus to sweat blood, he accepted his Father’s will.

This is not what the crowd wanted to hear. They wanted a physical, religious and political savior—one who would lead them to victory over the Romans—now. His words didn’t make a lot of sense until after his death, resurrection and ascension. When the Holy Spirit—the comfort he promised—arrived, things became to be made clear.

I believe the whole point of the Beatitudes is summed up in a statement Jesus made later in Matthew:

“Come to me, all of you who are weary and burdened, and I will give you rest. Take my yoke upon you and learn from me, for I am gentle and humble in heart, and you will find rest for your souls. For my yoke is easy and my burden is light” (Matt. 11: 28-30).

When we read the Beatitudes, are we looking to Jesus? Is there something troubling our hearts? Are we mourning? Do we think we have this “meek” thing down, only to realize that pride is still burning in our hearts? Do we become resentful and afraid because what we are hoping for—maybe even expecting—is not happening? Guess what, someone knows exactly how we feel; Jesus felt that way too. The difference is, of course, he fought the fight for us and won. Because of his victory, we can find a bit of hope in the middle of our fear, confusion, doubt and sorrow. We shouldn’t be surprised when we find ourselves “poor in spirit,” or mourning. Jesus told us he knows there are times we will feel all is lost and no one understands.

Jesus was preparing his disciples and us to understand that in this life we will suffer and hurt just as he did, but he offers us love, comfort and rest—in him, we inherit the kingdom of heaven. The Beatitudes tell us Jesus really does get it.

One thought on “The Beatitudes”