This week’s theme is Jesus is our Lord and our God. Psalm 118 tells the Lord is God. Acts 5 shows the faith of the apostles who said they must preach the risen Lord who is alive and exalted. Jesus is the Alpha and the Omega, we read in Revelation. He is the one who is, who was, and who is to come. This week’s sermon focuses on Thomas, the first disciple to recognize Jesus as Lord and God.

Suggestion: Share a time when you thought nothing good could come out of a situation, or a time you were full of doubt. Ask the members if they want to share a time of doubt or when they lost hope. Ask if they can imagine what the disciples were going through as they hid.

Let’s pick up the story in the book of John.

On the evening of that day, the first of the week, the doors being locked where the disciples were for fear of the Jews, Jesus came and stood among them and said to them, “Peace be with you” (John 20:19-20 ESV).

The doors are locked. It’s an interesting contrast here with what goes on in the earlier part of the chapter. Mary Magdalene is out in the garden, by herself, walking to the tomb. She’s on her own, facing the elements and who knows what. Peter and John came out for a minute and then ran back into the locked room. Mary is the brave one, out on her own because of her confused love for Jesus.

The disciples are meeting together. That must have been a strange day, or whole week, of conversations. They all betrayed Christ and ran off, except the women in the end, and here they’ve all come back together. They don’t know how to make sense of this with anyone else. They are kind of leaning on each other, not sure how—or if—they’ll ever make it back to normal life.

Then Peter and John come back with these stories of an empty grave. What does this mean? What about these words from Mary Magdalene, who claimed she saw the Lord? Then there were the disciples from Emmaus who said they saw the Lord. How do we make sense of this, what do we do now, what happens to— 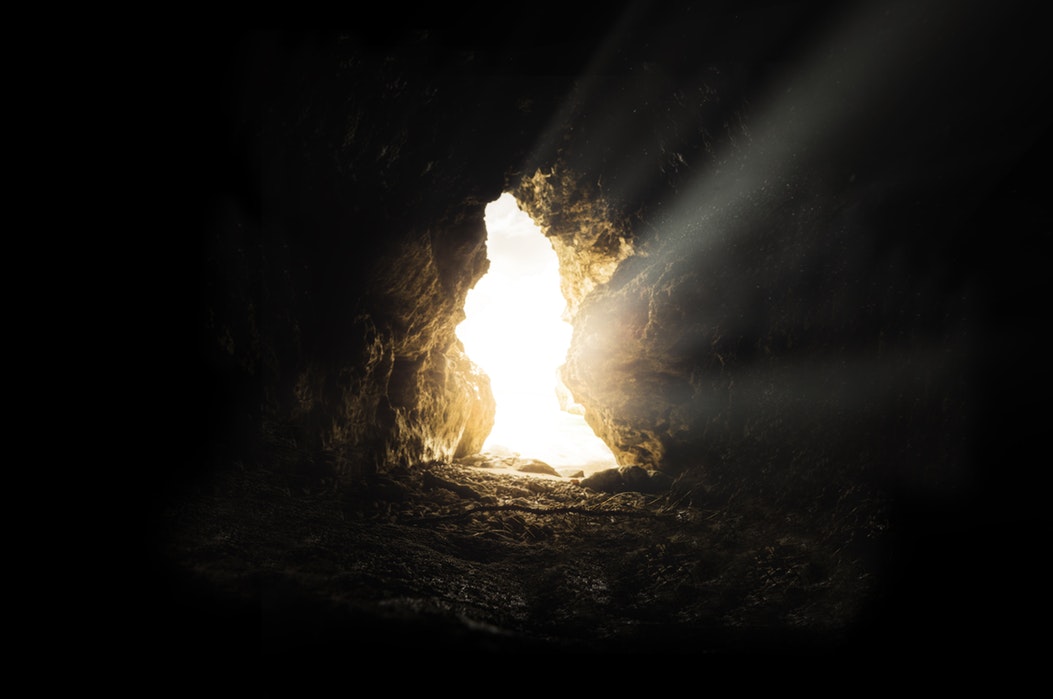 And suddenly he is there.

“Peace be with you.” This is similar to the greeting that angels always gave when they appeared—“do not be afraid.” “Peace be with you” echoes into all levels of being. Peace be in that room, despite this strange being who has just appeared, and peace be between God and humanity forever. From the conversation with the snake in the garden to the battles in the final days of humanity, the phrase echoes out: Peace be with you.

When he had said this, he showed them his hands and side. The disciples were glad when they saw the Lord. Jesus said to them again, “Peace be with you. As the Father has sent me, even so I am sending you.” And when he had said this, he breathed on them and said to them, “Receive the Holy Spirit. If you forgive the sins of any, they are forgiven them, if you withhold forgiveness from any, it is withheld” (John 20:20-23 ESV).

They were there because of fear, and when they saw his wounds, they were glad. It was indeed him—the one they know and love, the one who shared in their pain and who was killed by their structure of government and empire.

And he breathed on them. Here John is putting the whole story together again. Just as the Lord breathed life into Adam so many eons before, so here he is again. Here he is breathing life again, and with his breath he is bringing back to life the part of us that had died in the garden. The part of us that died when Adam and Eve first ate of that fruit can now be made alive again.

Then he said to forgive others—let others experience what they were experiencing. We should not think that it’s up to us to forgive—only God can forgive, and he did it at the cross. We can say, if you don’t forgive them, they cannot experience what it is to be forgiven. We represent the One who forgives; we cannot represent him if we don’t also forgive.

Let’s now focus on Thomas. First a bit of background.

Thomas is introduced as “the one called the twin,” with no further explanation. Much has been written on what this means, but in the end we don’t know. There are some things in the Bible that we don’t know for sure, some details that aren’t tied up. That’s okay. Not every single question is going to be answered, not every wrinkle is going to be ironed out. Sometimes we get ourselves in a tizzy of doubt because we can’t answer all the questions that life and gospel throw at us. Faith happens in real life, just like the Gospels happened in real life, and in real life the answers aren’t that easy to put together. In real life, you marry the person who you think you can spend your life with. In real life, you have kids when you think you are ready.

Thomas’s unknown twin lends a dimension of reality to the Gospel story. It’s the kind of nonfiction detail that sticks out. There are details like this all over this story if you look close enough. Why was the stone rolled away when Jesus could walk through walls and graveclothes? Why would he appear to only ten of the apostles—knowing that Thomas wasn’t there? (Judas was gone by this point.) We don’t know exactly, but it’s nothing to panic over; maybe one day we will know the answers.

The interesting thing about Thomas is he has only a few lines in scripture before his famous scene here at the locked room.

Thomas was not with them. What a great designation. I love that reality here. I think we’ve all been Thomas at one time or another, and most of us know some Thomas-es. Someone who keeps asking questions, someone who just won’t go along with the crowd, won’t get with the program. C’mon, Thomas! Get with the program!

Notice Thomas didn’t just say, “I have my doubts;” he said unless I see, I will never believe.” That wording indicates there was pain with his doubts. We don’t know why Thomas wasn’t gathered with the other disciples, but his doubtful response leads us to wonder if he was privately dealing with his pain.

Eight days later, his disciples were inside again, and Thomas was with them. Although the doors were locked, Jesus came and stood among them and said, “Peace be with you.” Then he said to Thomas, “Put your finger here, and see my hands; and put out your hand, and place it in my side. Do not disbelieve, but believe.” Thomas answered him, “My Lord and my God!” Jesus said to him, “Have you believed because you have seen me? Blessed are those who have not seen and yet have believed” (John 20:24-29 ESV).

Isn’t it just like God to make a special appearance for the one missing apostle. Here is Jesus, making an extra trip—an extra appearance—to meet with this broken person. That is the Lord we serve. Put your finger here, put your hand here.

And Thomas responds by naming Jesus: My Lord, and My God.

Thomas was an apostle who led with his heart. Like many, he was emotional, up-and-down, unpredictable. He was the one who was bold enough to voice his doubts even when everyone else was on board. He not only had his feet washed by Jesus, he put his hand directly into the wounds of Jesus, there are few gestures more intimate than that. This doubter was the first to recognize Jesus as Lord and God. He was the apostle who later travelled further than any of the other 12 to spread the gospel. Legend has it that he went to India.

Thomas the doubter was imprisoned, tortured, lived in a cave, and finally run through with spears and beheaded so they could make sure he was dead. As much as he was doubtful, he ended up being doggedly loyal. As cold as his doubts were, his faith ran just as hot. All because his Lord lavished grace upon grace for him, just as he does for us.

We all doubt from time to time; we all deal with emotions and pain, and worry and fear. There are times when we feel like Thomas the doubter, and there are other times we stand like Thomas and declare Jesus as “My Lord and my God.” So what do we do when doubts arise?

On this doubter’s Sunday, what do we take home with us?