This week’s theme is Remembering whose we are. The Psalmist reminds us to “pant for God” when our soul is downcast, to put our hope in him, even when we feel we are at the end of our rope. This happens when we believe we are still in custody to the law, as Paul told the believers in Galatia, and we forget who we are and that we belong to Christ. The story in Luke of “Legion” possessing the man who could break his chains reminds us that no matter how bad it can get, God is for us—we belong to him.

The Voice of Truth

Have you ever felt alone? Or like you are the only one going through a certain type of situation. I know I have.

Share a personal story—or one you are familiar with—of being alone. At some point in the sermon, you may want to play the Casting Crowns song, “The Voice of Truth.”

This is one pastor’s personal story: I have two siblings who tried to commit suicide—an older sister and my twin brother. Both situations were very painful, for my twin brother, it was like I felt his pain. I knew he felt like a failure, not worthy of living. Feeling like he was all alone, he ran. He’d had enough. I was at summer camp when I got the news that my brother was missing. The family suspected he might try to commit suicide. I felt alone, so far away from the rest of the family. And I felt like no one could understand what I was going through, like I was the only one who felt that way. At least that what I told myself. Truth is, I was listening to the wrong voice about myself, just like my sister and brother gave in to their depression by listening to and believing negative words about themselves. Thankfully, neither sibling was successful with their attempt, and both are alive and well today.

The Bible tells us that God never leaves us nor forsakes us; he is with us always—even when we least feel his presence. In spite of this truth, we sometimes find ourselves afraid, feeling alone, believing no one cares or no on loves us. Whenever I feel alone, when I hear those voices telling me I am no good—that no one cares or loves me—I remember Elijah. There is a story in 1 Kings that should give us some encouragement.

Elijah was a prophet of Israel who served the Lord. He prophesied against Israel because of the kings and people’s idolatrous ways of turning away from God and serving false gods and idols. The king of Israel at the time was Ahab—who, according to Scripture— “did more evil in the eyes of the Lord than any of those before him” (1 Kings 16:30). He married a pagan woman named Jezebel, who led him to worship Baal. He eventually set up an altar for Baal and made an Asherah pole—a sacred pole (or sometimes a tree) that was used in the worship of the pagan goddess Asherah. Ahab “did more to arouse the anger of the Lord, the God of Israel, than did all the kings of Israel before him” Kings 16:33).

Jezebel wasn’t finished: she started killing off the Lord’s prophets. She and Ahab were after Elijah in particular. (You can read the story in 1 Kings 18.) At the same time, Ahab and Jezebel set up their own prophets—450 prophets of Baal and 400 prophets of Asherah.

Dealing with the false prophets

God sent Elijah to meet Ahab and all the prophets of Baal on Mt. Carmel. There Elijah pointed out he was only one of the Lord’s prophets against 450 prophets of Baal. He challenged them to a duel by giving these instructions:

The prophets of Baal called on their god all day long, and not as much as a spark came close to the altar (I Kings 18:26-29.) At first Elijah mocked them and encouraged them to shout louder—saying maybe their god was deep in thought or busy, or traveling, or asleep. The prophets of Baal finally gave up.

Then Elijah had a trench dug around the Lord’s altar and ordered four large jars of water to be poured on it and over the wood. This was done three times. The altar was drenched, and water filled the trench. Then Elijah prayed:

“Lord, the God of Abraham, Isaac and Israel, let it be known today that you are God in Israel and that I am your servant and have done all these things at your command. Answer me, Lord, answer me, so these people will know that you, Lord, are God, and that you are turning their hearts back again.”

Then the fire of the Lord fell and burned up the sacrifice, the wood, the stones and the soil, and also licked up the water in the trench. When all the people saw this, they fell prostrate and cried, “The Lord—he is God! The Lord—he is God!” (I Kings 18:36-39).

Elijah then demanded that all the prophets of Baal be killed.

A powerful story—God was with him. Nothing could stop this fearless leader—this prophet of God. Well, nothing except fear, and the feeling of being alone. The story picks up in 1 Kings 19.

Now Ahab told Jezebel everything Elijah had done and how he had killed all the prophets with the sword. So Jezebel sent a messenger to Elijah to say, “May the gods deal with me, be it ever so severely, if by this time tomorrow I do not make your life like that of one of them.” Elijah was afraid and ran for his life (1 Kings 19:1-3).

What happened here? One moment Elijah is at the top of his game—God had revealed himself in an incredible way and 450 prophets of Baal lost their lives. Elijah should have been on top of the world. But when Jezebel flipped out and sent a warning to Elijah, he got scared and ran into the wilderness.

When he got to a place of hiding, he sat down under a tree and prayed—not to give praise to God for what he had just experienced, but rather a cry of despair.

Elijah, seeing the powerful influence that Jezebel was still exercising despite his triumph on Mt. Carmel, lost hope of ever reforming the king and people. It’s like he concluded that God could only do so much—the enemy was still out there. Elijah started to feel alone and so he prayed for release from the troubles and anxieties of a wicked world.

Have you ever lost hope like this? Yes, you’ve had some great spiritual highs—prayers answered, feeling God’s presence, seeing a miracle take place—but they can be followed by a spiritual low. Now you just want to lay down under a tree, or crawl into bed, and sleep? Have you ever wanted to run, just run away because you lost your purpose? Or wondered if even God could help? I think we can identify with Elijah on some level or another.

In his woe, Elijah lay down and fell asleep. Note the good evidence he was not alone:

All at once an angel touched him and said, “Get up and eat.” He looked around, and there by his head was some bread baked over hot coals, and a jar of water. He ate and drank and then lay down again. The angel of the Lord came back a second time and touched him and said, “Get up and eat, for the journey is too much for you.” So he got up and ate and drank. Strengthened by that food, he traveled forty days and forty nights until he reached Horeb, the mountain of God. There he went into a cave and spent the night (1 Kings 19:5-9).

Here is a prime example of Elijah’s feelings lying to him. He wasn’t alone; an angel came and fed him. Still, Elijah went to hide again. After some time, the Lord came and said, “What are you doing, Elijah?

He replied, “I have been very zealous for the Lord God Almighty. The Israelites have rejected your covenant, torn down your altars, and put your prophets to death with the sword. I am the only one left, and now they are trying to kill me too” (1 Kings 19:10).

God told Elijah to stand in the presence of the Lord. First there was a great wind, then an earthquake, then a fire, and then a gentle whisper—God was making his presence known, but Elijah still felt alone, and full of fear.

“I am the only one left—yes, I know you are there, God, but no one else believes in you. I can’t do this anymore. It’s me against the world.” 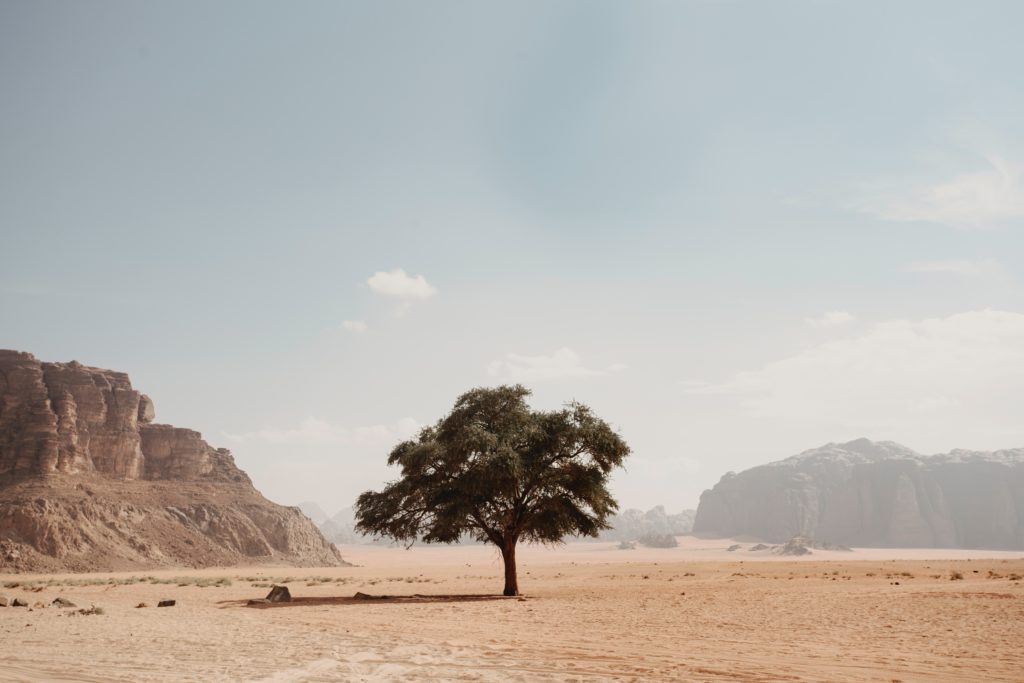 You are not alone

This story speaks to us on a number of levels. There are times when we feel so lonely that we might even believe we are the only one going through our kind of stuff. We listen to the voice that tells us we are alone with no help in sight. We feel alone, but that voice and that feeling is not speaking truth. There is another voice we need to listen to—the voice of truth. God is never done with us.

God told Elijah: I have always been with you. In the midst of your distress and dejection, I am with you. In your triumphs and your failures, I provide for you. I am with you now. Here is your identity and purpose. It is in me. Now go and live for me and serve me.

There are always others who have gone through similar circumstances you go through. There are others who can encourage you and who need to be encouraged by you. This is what relationship is all about—sharing our stories, listening to each other, encouraging each other, always pointing each other to the truth that we are never alone.

God is never done with us. Our identity is not in our successes or our failures—our identity is in the victory and personhood of Jesus Christ. Feelings lie to us, but God never does. He tells us we are never alone in Christ. Jesus promises he will never leave us nor forsake us. God will provide for us and sustain us. He provides help, hope and encouragement in the Bible stories we read, in our prayers, and in our relationship with him and with one another.

These stories are written for you to remember who God is. He is doing a work in you because the story is continuing. You and I are part of that story. Share the story with others—let them know they can hear and believe the voice of truth.