GiANT Worldwide’s Apprenticeship Square (see below) provides a clear path for multiplying mentors—mentoring mentors to be mentors. This relates directly to one of GCI’s primary goals–-to develop leaders who then develop more leaders. (Hmmm, sounds a lot like making disciples who make disciples.) 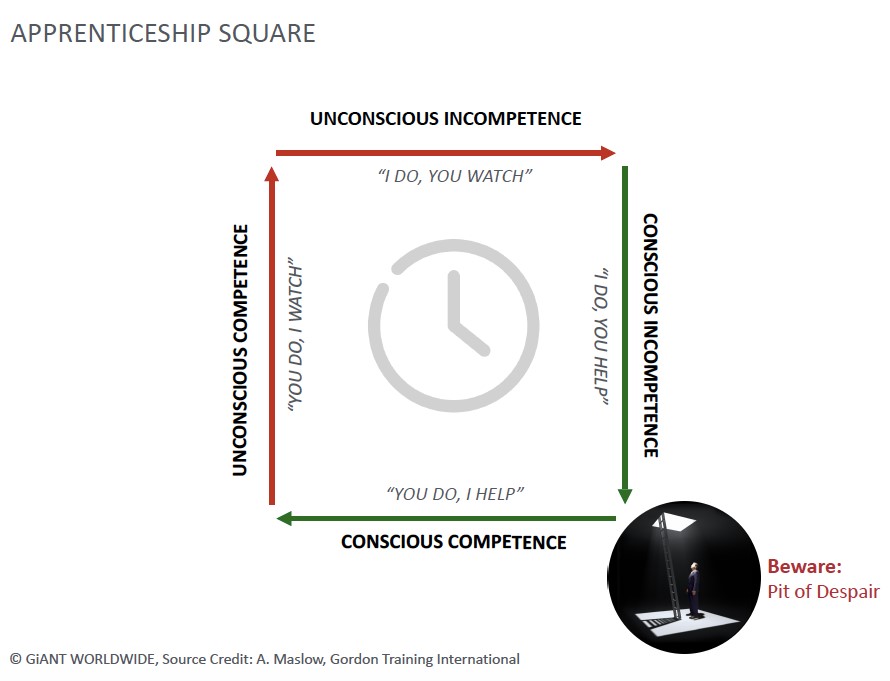 Let me use my experience learning about irrigation to show how this square works. As you read my story, think of your own journey as you learned your job skill. Whether you are a brick-layer or a ministry leader, the four stages of the Apprenticeship Square are applicable.

Within the first hour of work, I began to realize how little I knew about irrigation. Just from observation I knew an irrigation system included pipe, glue, sprinkler heads and water. I also knew it must require digging trenches to lay pipe. As I spent time with my friend, it seemed every time I turned around I found out there was something else I did not know. I went home after that first day marveling at how much there was to installing irrigation systems. And that was just the first day.

I was unconsciously incompetent, I had no idea what I did not know. And the only way I could learn was by observing. Thus, the first step in mentoring is the idea, “I do, you watch.” My friend told me to not do anything until I had first watched him. Over the next several days I watched him as he talked to the owners about what they wanted. I watched him take note of the different trees, plants and gardens in the landscape. I watched him take several measurements – far more than I would have imagined. I watched him check the water pressure to determine the number of valves he would need. Then I watched as he laid out a plan on paper before ever taking a shovel out and breaking ground. This watching confirmed again and again how much I did not know. But this was just the first part of my learning.

In this second step, “I do, you help,” I was able to get my hands dirty by helping my friend. I helped him dig the trenches and lay the pipe. I learned how to glue – who knew you needed to prime the pipe before you glued it. I learned about different pipe fittings and how if you don’t get the fitting in the right direction before the glue dries, you’ve just made your job more difficult. I learned about valves and how to hook them up to the water source. I learned how important it is to flush the system before adding the sprinkler heads. (You learn this when your sprinkler heads get clogged up with glue because you didn’t flush the system.) And I kept learning there was more to learn. I became aware of how much I needed to learn about each step of the process. I learned a great deal from the mistakes I kept making, becoming more and more aware of my incompetence.

The challenge in this second step is to keep moving forward and not fall into the pit of despair. When you become conscious of your incompetence, it’s easy to get discouraged and wonder if you will ever get it right. You might start questioning more than your ability to do the job—you might start to question your ability to even learn. This is when a good mentor steps in and gives encouragement. A good mentor understands mistakes will be made and they are valuable lessons.

I had a pastoral intern who had made some significant mistakes and got quite discouraged. During one of our weekly debriefs, I noted he was discouraged and asked what was on his mind. He said, “Well, I’m waiting for you to address my mistakes.” I told him I didn’t feel the need to address them. He had already learned from them. “Will you make the same mistake the next time?” I asked. “No,” he responded, “once was enough.” Lesson learned!

It wasn’t long before my friend gave me the tools and told me to do things while he watched. As I progressed in my skills, he would leave me with a part of the job and remind me he was just a shout away. He would check each stage of my development, helping me become more and more competent. In this “you do, I help” stage, I was aware of what I knew. I carefully measured, designed, dug trenches, laid pipe, primed and glued all the fittings, hooked up to water mains, flushed systems, added and adjusted sprinkler heads, and set up automatic irrigation controllers. My friend came to check my work less and less as the weeks progressed. I became more and more confident in my ability to do the job. I was aware of my competence.

Over time, I learned to do much of the work without thinking. I didn’t have to stop and think about the next step—I did it automatically. I learned to walk into a yard and know what was necessary within a few minutes. I could pretty well determine where I needed sprinkler heads, how much pipe I would need, and what type of controller would work best. I had a design in my head before I even picked up pencil and papers. This final step in the apprenticeship square is known as the “You do, I watch” step. My friend could work on a different project in the yard, or even leave me at a job and know everything was going to be done and done well. I was so competent in what I was doing, I didn’t have to think through all the steps.
It is in this stage that the apprenticeship square can continue and “you” become the “I” as you find a new person to train (mentor).