This article is from GCI-USA Regional Pastor and Equipper Feature Editor, Rick Shallenberger.

In the first few months of being employed full-time as a GCI pastor, I had a wonderful idea of how to get the entire congregation into small groups. I shared my idea with the congregation’s leadership team, believing I had their full support. I spent months working on charts, figuring out who would attend which group, who would be the facilitators and what topics would be covered. Each time we met, I shared where I was in the planning process and tried to get the team as excited as I was.

A couple of weeks before I planned to announce the plan to the congregation, I had one more meeting with the leaders to get their input. I quickly realized that the team was not as enthusiastic as I was. I asked what was up. After some hemming and hawing, one brave soul spoke up: “Well, it’s a nice idea, but it’s not going to work.” Others chimed in with reasons the plan was not going to work and added that trying to implement it could damage the congregation. I was in a bit of shock. I asked why hadn’t anyone said anything earlier? The response: “Well, you are the pastor, we are supposed to follow you. And honestly, you didn’t ask for our advice.”

That was a learning opportunity for me and the team. I had assumed the team knew I wanted their input and that they were free to disagree. But based on their previous experience, they were assuming things would be done my way, because, after all, I was the pastor. As time progressed, and we learned to work together, we had some good laughs about how our first few months went. It was a learning opportunity for us all.

Some of us on the GCI-USA Church Administration and Development (CAD) team, with the help of GiANT Worldwide consultant Tom Nebal, have been learning about what is called the CORE process of leadership. Here’s what it looks like in chart form: 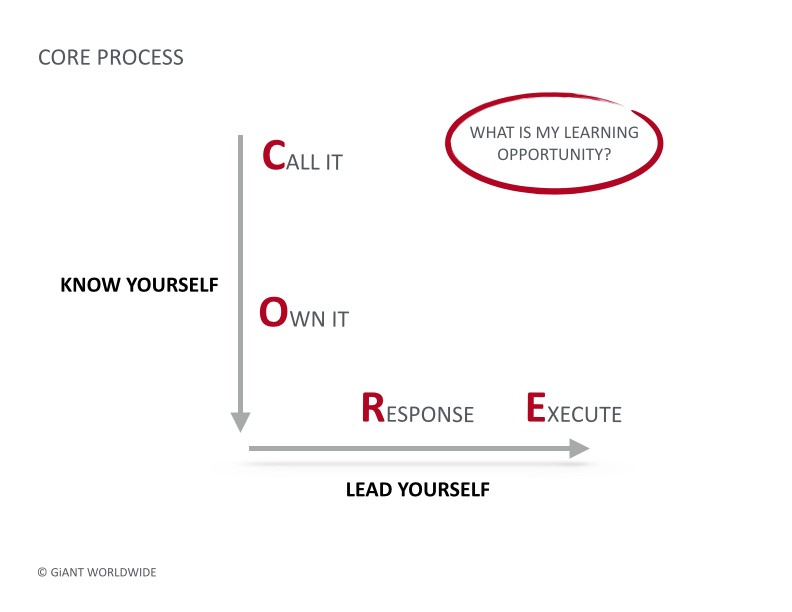 As explained in an earlier Equipper article, the Core process involves knowing yourself to lead yourself. The leadership process that syncs with this journey has four steps: call it, own it, response and execute. Reflecting on the learning opportunity described above in light of this process led me to the following observations. I hope what I share here will be of help to you and others on your leadership team.

What was my learning opportunity? In this case I had failed to establish meaningful parameters for making decisions as a team. Those parameters should have included the following:

It might have been easy for me to try to turn this situation on the team: “You guys were just going to let me fail?” But it’s important for a leader to take personal responsibility in each learning opportunity. So I had to own it: “I apologize for not being clear on how I see this team working. I want to hear your thoughts, even if you disagree with mine. That’s how we work together.”

It’s unfortunate that some leaders don’t understand that their role is to lead, not demand. A good leader owns the learning opportunities, though, admittedly, it’s not always easy to do so. If you’re like me, your first reaction might be defensive. But work past that defensiveness, listen to others, then own the learning opportunity.

Once you call it, then own it, the next step in benefitting from the learning opportunity is to determine the right response. Here’s something I learned: just because you’ve taken personal responsibility doesn’t mean you’re alone in determining the response.

When I got over the shock that none of the team members believed my plan would work, I asked for their advice. In order for us to work as a team, I knew I needed their input. As we talked, I realized some steps I could take to be more effective as the team’s leader. I asked them to help me be a better leader by reminding me to ask for their input, thus helping me stay accountable to the team. We worked out our responses together.

After determining the right response(s), the next step is to execute—to put the selected response into practice. It’s easy to fall back into old (sometimes bad) habits, so others are needed to keep us accountable so that we can move forward as a team.

The example I gave above was not the last time I got over-enthusiastic about a plan that would not work. Thankfully, the team knew I wanted their input and felt free to share it as we worked together as a team.

Call it, Own it, Response, Execute—these are the steps in the CORE process and key elements in effective, team-based leadership.

We all work best when given clear expectations (challenges) along with strong support. In CAD we refer to this as “high support with high challenge.” Most of us have worked in environments where these two elements were not present in balance. Perhaps you’ve worked where there was high challenge but little, if any, support. Some have experienced high support with little, if any, challenge. And some have experienced little support or challenge. These experiences point to the reality that there are four basic leadership types/approaches (as shown in the matrix below): abdicator, protector, dominator and liberator. Let’s look at each, asking two questions: 1) What type of leader am I? 2) What sort of environment exists in my congregation or ministry team? 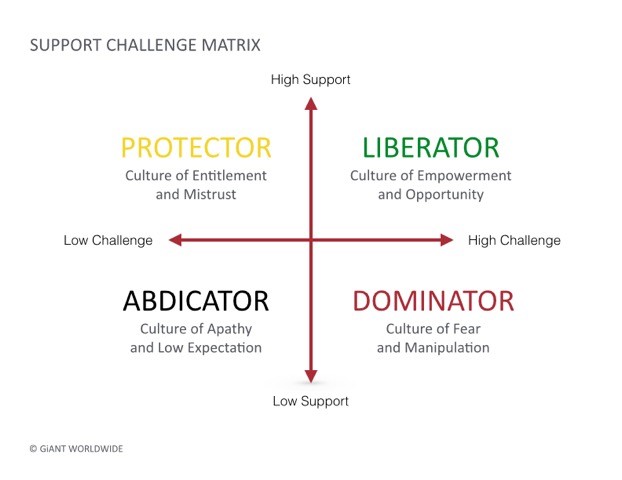 When we as leaders provide little support or challenge, we are operating as an abdicator—taking no responsibility for what needs to be done. The result of that sort of leadership is apathy. When expectations are low, results are low as well.

When we provide high support but no challenge, we may be implying that we do not trust those we lead to fulfill their responsibilities. Enablers are often found in this category—ones who might initially give a challenge but then, feeling the challenge is too much, withdraw it and do the task themselves. A protector may be more focused on affirming you and making you feel special than on helping you perform and thus grow. A leader who is more concerned about being liked than being effective will likely give high support but low challenge. This approach tends to yield mistrust and an atmosphere of entitlement.

The leader who gives high challenge but low support comes across as more interested in tasks than in people. Dominators often micro-manage. They give lots of responsibility (often they are good delegators), but rather than empowering the person to accomplish the task his or her way, they insist that the task be done their way. Because the dominator is not always clear about what their way entails, an atmosphere of fear and resentment results. Instead of feeling part of a team, people feel like pawns being manipulated to do the leader’s work the leader’s way.

Effective leaders empower people to lead others. Liberating leaders give team members challenges and then ask, “How can I help you, or resource you, to do this task?” A liberator doesn’t tell you how to do the task and doesn’t want you coming back to them with all the details. She trusts you to do what needs to be done using your gifts and talents. As a result, you feel liberated, empowered and you start looking for more opportunities to serve.

This is only a brief synopsis of the CORE process and the four leadership types. If you’d like to learn more, your Regional Pastor is happy to review this material with you in greater depth, helping you develop the leadership team within your congregation.

Let me close by offering a challenge. Each of our Regional Pastors take their responsibilities seriously. They spend a lot of time praying for guidance and direction, asking God to help them be leaders who are liberators. I challenge you to spend a few minutes each day praying for your RP. I believe that, with Christ as our guide, as we pray and work together as teams of leaders who are liberators, we will see more and more leaders emerge to serve both the present and the future of GCI.

One thought on “On Leadership: Toward team-based leadership”