Our Superintendent serving Europe, James Henderson, writes an informative and inspirational letter from his personal experiences. In April 2019 I, along with Kalengule Kaoma and Mat Morgan had the opportunity to tour two of the slave castles in Cape Coast, Ghana. The Atlantic Slave Trade lasted for 300 years, from the 16th through the 19th century. It is estimated that 70,000 slaves per year were trafficked out of West Africa and some 40 castles participated in this inhumane enterprise. Former President Barack Obama was exactly right when he said “it reminds us of the capacity of human beings to commit great evil.”  (GCI President Greg Williams)

Jesus took on the guilt of our evil, and not once did he say, “I didn’t do it.” Protesting my innocence about racism is not the point. Feeling sorrow for the suffering that people who looked like me caused and can still cause is the point.

Some years ago I visited a few of the infamous slave castles along the coast of Western Africa. These are where captives were “stored” prior to being shipped to the New World (the Americas and the Caribbean) and to other places. I went to see one of the most famous of the castles in Ghana. It was a brilliantly sunny day, and everything seemed right with the world. As my friend, Gabriel, and I entered the gates, children were playing in a carefree way and street vendors tried to sell us richly colored cloths and African souvenirs — it was just like walking into one of the typical Ghanaian markets. I was not prepared for what lay ahead. 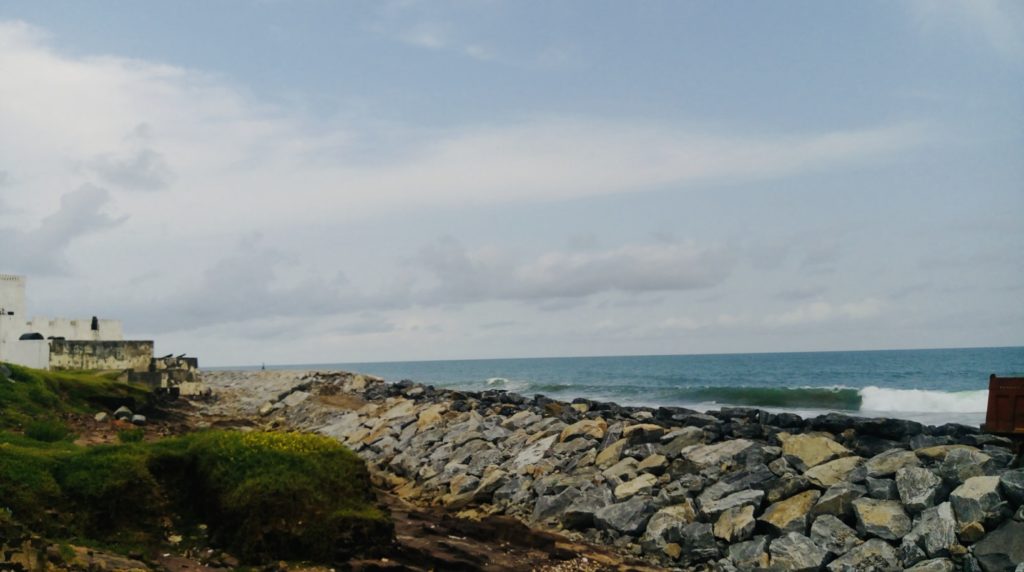 The sun was so bright, making everything look clear and the white stone whiter, masking the horrors of the past. We went down to the windowless slave quarters where human beings were locked away in appalling squalor while up above them the governor and his guests were wined and dined. We saw the lightless holes where offenders were kept prior to execution, we promenaded along the ramparts with the cannons facing seaward and we visited the women’s quarters where mothers and daughters had huddled together in abject misery and in fear of rape, death and disease. Then we walked silently to the “Door of No Return”—once slaves passed through this dark heavy door, they boarded the ships, never to return to Africa. Some say that even today the sharks follow the same trails of the slave ships as if instinctively waiting for their human prey to be cast overboard. Slavery was not new to Africa. The Arab slave trade had been in place for centuries before then, and the Africans themselves had also been guilty of selling rival tribal members into bondage. But in sheer numbers, this was much worse. “Between 10 million and 12 million enslaved Africans” crossed the Atlantic Ocean to the Americas from the 16th to the 19th century[i].

The ghosts in my mind cried out as I imagined the screams of the women being raped callously by the guards, of the old people being beaten to death because they had outlived their commercial worth, of the helpless children snatched violently from their parents, and of the young men getting their spirit broken by the whippings, the torture, and by the hopelessness of it all. In my mind’s eye I could see the slaves crushed together in the gloomy chambers without natural light and sanitation, frightened, sobbing, praying to gods that did not deliver. I could see them walking slowly to the Door of No Return, some being dragged and kicked there, and then the door closes and they are gone forever from their roots.

“I’m sorry”, I thought—in a way, because of man’s inhumanity to man, I did this. The reality is that I am still capable of doing it. I believe all of us, no matter what our ethnic or gender background, are capable of enslaving and mistreating others. We can all be tyrants: in the home, at work, wherever. Do you suppress your partner, your children, those who don’t look like you, those who don’t think like you? Left to our own devices, each of us is capable of being cruel and of victimizing others.

As I turned back into the main courtyard, I saw a woman, who turned out to be an African American. She was sobbing uncontrollably. She looked at me and I felt accused. Doubly accused, because I am white and male. Suddenly I became defensive. I wanted to tell her I didn’t do this. I didn’t put my fellow men into servile chains and sexually exploit their women. I didn’t do it. I was not even born. The woman stared at me, no words, and I tried to look away, but couldn’t. Maybe this was her grief of a people lost, and I was intruding. “I DIDN’T DO IT!” I screamed in my head.

I’m a Christian, and ­I thought of Jesus. The theory is that Jesus took on the guilt of our evil, and not once did he say, “I didn’t do it”. Protesting my innocence was not the point. Feeling sorrow for the suffering caused by people who looked like me is the point. People who look like me can still cause such suffering. I didn’t do it, but I could have, and there but for the grace of God go all of us, no matter what race or tribe we are.

Probably all of us would like to think that we humans have learned lessons from slavery, in the same way that we could have learned from other atrocities such as genocide. Sadly, history indicates that we don’t learn the lessons. Genocide is still with us; slavery—and racism—have not gone away. Why not? Is it that we do not really change? Behind slavery is the evil of racism, and what really needs to be toppled and laid to rest is racism in all its guises and forms. Racism is just one variant of “my group”ism, which stems from me-ism, which afflicts us all.

Do we still feel an instant prejudice within when we see someone of another race or skin tone, or who dresses in a different way? We react negatively and keep them at a distance. Without spiritual transformation, men and women may progress technologically and scientifically, but human nature does not change without the indwelling presence of Christ through the Holy Spirit.

Because of Jesus, a change in our—yours and mine—human nature is possible now. It’s possible by turning to God’s Son, Jesus Christ, and asking him to save us from ourselves, asking him to open your heart to see others as he sees them. No matter your ethnic background, be honest about your racism and other prejudices, and ask him to change how you think so that you think in a loving and inclusive way just like Jesus did. That would make a difference in this uncaring world—to have another Christ-like person walk in it.

It may seem a small start, but that’s how miracles begin. It’s time to close the door on racism, and don’t let it come back. Let’s close that Door of No Return.

5 thoughts on “The Door of No Return”