This week the theme is God’s wild romance. Psalm 116:1-2, 12-19 is the song of someone who has been lavishly blessed by God’s generosity. Romans 5 talks about God’s preemptive love that reached us while we were still sinners. Matthew 9 and 10 tell about Jesus sending out his disciples with the message of God’s love. Our sermon is from Genesis 18 and 21, which tell us the beginning of the story. The three strangers come to visit Abraham and Sarah and reiterate the promise of a dynasty from Abraham. Sarah’s scoffing laughter that eventually becomes joyful laughter tells us that God’s love is creative, joyful, unstoppable and wild.

Have you ever laughed inappropriately? Or not been able to control your laughter at exactly the wrong moment? Have you ever been the only one in the room laughing at a joke that no one else got? Is there something that always makes you laugh?

Share a story here about a time when laughter got you into trouble. Depending on the size of your fellowship, this could be a fun conversation, too.

There’s not a person on earth who hasn’t laughed at the wrong time, giggled in a solemn moment, or guffawed themselves into tears no matter how embarrassing. Nineteenth century thinker William Osler said it well: “Laughter is the music of life.” It’s a music we can all hear and relate to. 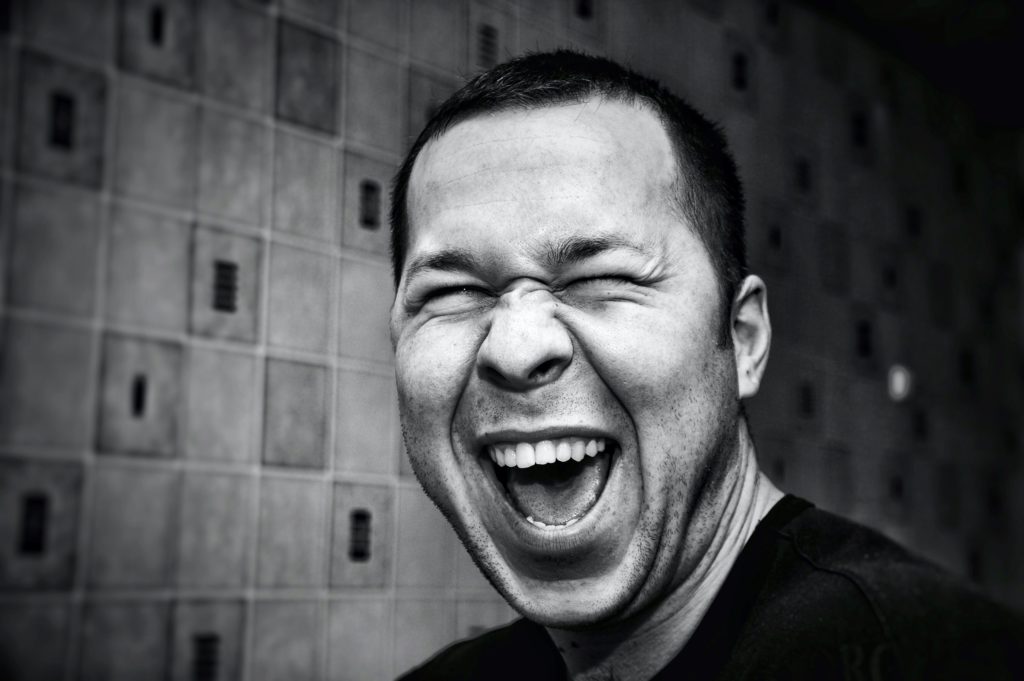 Does anyone remember the song “Father Abraham”? (…had many sons! I am one of them and so are you, so let’s just praise the Lord …). Forgive the gender-biased language; it’s an older song. But it expresses a great truth of our faith. Humanity lost the connection with God through sin at the fall, and God worked that connection back into place through thousands of years to finally bring us Jesus.

Abraham is the beginning of that lineage—Jesus’ great-great-lotsa-greats grandfather. And hence, in the family of faith, he is the spiritual father of all who call themselves Christians.

So, sing with me, Father Abraham…

Let’s look at this awesome story of faith today, the very beginning of the lineage of Jesus. We start in the semi-arid area of the Oaks of Mamre, which is a fascinating contrast to where the story of humanity started, in a garden!

But we’re in the desert and a very old man and his elderly wife are living there, and apparently doing fairly well. They and their family and servants are nomads. Let’s look at our passage in verse 1:

And the Lord appeared to him by the oaks of Mamre, as he sat at the door of his tent in the heat of the day. (Genesis 18:1 ESV)

The heat of the day was siesta time. It was too hot to do anything but rest. It was a time of day when there wasn’t the distraction of work or activity. Just them, listening to the wind batter the tent, and perhaps wondering what in the world God was up to.

It seems that God often meets us when we have nothing to do. God had promised Abraham that he would be the father of great nations, but that was years before, and now he and his wife’s bodies were well beyond being capable of having children.

He lifted up his eyes and looked, and behold, three men were standing in front of him. When he saw them, he ran from the tent door to meet them. (Genesis 18:2 ESV)

Let’s not jump to pick apart every word here. Hospitality was vitally important in that society, but not without self-interest. A traveler meant trading goods, or news from far away, or at least some kind of companionship.

The way Abraham greets them would have been very typical.

When he saw them, he ran from the tent door to meet them and bowed himself to the earth and said, “O Lord, if I have found favor in your sight, do not pass by your servant. Let a little water be brought, and wash your feet, and rest yourselves under the tree, while I bring a morsel of bread, that you may refresh yourselves, and after that you may pass on—since you have come to your servant. (Genesis 17:2-5 ESV)

This was common. Hospitality was a matter of survival for the host and the guest (as opposed to today, when there’s more than enough to go around and we don’t know how to share).

What’s interesting is what Abraham offers them at first: a good foot-washing, some rest and a bit of bread. Commentators don’t know what to make of this exactly. It could be that Abraham is just doing the standard greeting for passers-by.

The progression of how he hosts them is interesting. Look at the following verses:

And Abraham went quickly into the tent to Sarah and said, “Quick! Three seahs of fine flour! Knead it, and make cakes.” And Abraham ran to the herd and took a calf, tender and good, and gave it to a young man, who prepared it quickly. Then he took curds and milk and the calf that he had prepared, and set it before them. And he stood by them under the tree while they ate. (Genesis 18:6-8 ESV)

It was decades previously that God took Abraham out under the stars and told him his descendants would outnumber even these. The promise has been held out in front of him and Sarah several times now, to the point they eventually tried to help God, and thus Ishmael was born.

And now on this random day in the desert place, God shows up. Abraham feels an old lightning strike in his heart, something in his brain quickens.

Isn’t this how God comes to us sometimes? Someone comes out of nowhere, and you suddenly realize God is speaking. We ask for God’s guidance or reassurance and then, in an otherwise humdrum exchange, God answers our prayer.

God often comes to us dressed up as our lives. People, relationships, circumstances—pay attention! Don’t expect him to just come to you in church when you’re being “churchy.” He plays in every frequency and can speak through anyone.

One of the most famous stories of this is Saint Augustine. He became one of the most important theologians in church history, but he started as a spoiled rich kid who took part in cults and had a famous appetite for women.

He eventually became acutely aware of his sin and was in tears wondering if he would ever be delivered from it. He was crying one day in a garden and heard a child singing the lyrics: “Take up and read; take up and read.” He picked up a Bible and read a passage in Romans:

God called him out of his old life and into holiness. He dropped everything and went on to become one of the great minds of the church. All because he heard a child – or an angel, or both – speaking to him from over a wall.

If you have kids, you know that God can speak to you even through them. Their wonder in life and their undefeated joy is an echo of heaven you can hear if you’re listening. But even more mundane: just an encouraging word from someone or a reminder of God’s promises.

You probably won’t notice right away, but it may become apparent to you that the voice speaking to you is not just that of a friend, or even an obnoxious coworker or a total stranger, but that God himself is answering your prayer or showing you direction.

It’s all about how you respond, and how quickly. Abraham goes from a polite greeting, to hosting, to putting out a feast for these messengers of God. And, more than likely, he was hosting Christ himself, although the commentators are still out on that one!

Even the challenging people in our lives, or the needy people we meet, can be a conduit of God’s love and life. Mother Theresa said it well: “I see Jesus in every human being. I say to myself; this is hungry Jesus, I must feed him. This is sick Jesus. This one has leprosy or gangrene; I must wash him and tend to him. I serve because I love Jesus.”

But how do we react?

Often, we have the reaction of Sarah, Abraham’s wife. They’ve both been promised a few times now that they will be the parents of a great lineage, and nothing has happened. They’ve gotten older, they’ve even tried to hotwire the process with disastrous results, and still there’s no baby. Just the desert wind and the waiting.

So when these three men walk out of nowhere and make promises, she reacts like most of us would:

They said to him, “Where is Sarah your wife?” And he said, “She is in the tent.” The Lord said, “I will surely return to you about this time next year, and Sarah your wife shall have a son.” And Sarah was listening at the tent door behind him. Now Abraham and Sarah were old, advanced in years. The way of women had ceased to be with Sarah. So Sarah laughed to herself, saying, “After I am worn out, and my lord is old, shall I have pleasure?” (Genesis 18:9-12 ESV)

Sarah laughed. In these completely understandable circumstances, she gave a tired, cynical chuckle. Who wouldn’t? Her body is way past birthing age, and, to put it lightly, her and Abraham’s love life consists more of moonlit walks than anything else at this point. A child? Yeah, right!

But it happens. A son, Isaac, is born to them within a year. The promise was delivered (pun intended). We love her reaction:

Abraham called the name of his son who was born to him, whom Sarah bore him, Isaac. And Abraham circumcised his son Isaac when he was eight days old, as God had commanded him. Abraham was a hundred years old when his son Isaac was born to him. And Sarah said, “God has made laughter for me; everyone who hears will laugh over me.” (Genesis 21:1-6 ESV)

That’s a classy lady. She’d heard the promise of God and laughed – first with skepticism, but now with joy. When the promise finally came true, she named him “Laughter.” The name Isaac is close to the Hebrew word for laughter: “Yitzak,” which is like the sound of laughter itself.

And so we have the laughter promise. God walks out of the middle of the desert and speaks promise to them. Abraham reacts with faith; Sarah reacts with cynicism. But even Sarah eventually reacts with faith and memorializes the memory in the name of her son. This is the way the lineage of Jesus started—with a promise out of nowhere and laughter. With a promise that came after their disastrous attempts to make the promise come true on their own, after their faith was long gone. The God of laughter was faithful.

So, what do we learn from this strange conversation?

May the God of laughter promises fill you with his plot-twisting, 11th hour joy today, and may you pass it on to someone else! Listen close!

Questions for Speaking of Life: “The Roots of Promise”

Questions for the sermon: “The Laughter Promise”

Quote to ponder: “Sarah and her husband had had plenty of hard knocks in their time, and there were plenty more of them still to come, but at that moment when the angel told them they’d better start dipping into their old-age pensions for cash to build a nursery, the reason they laughed was that it suddenly dawned on them that the wildest dreams they’d ever had hadn’t been half wild enough.” —Frederick Buechner