The theme for this week is the “foolish” wisdom of God; his ways are not our ways. Micah 6:1-8 narrows down all the complexity of ritual and theology to acting justly, loving mercy and walking humbly with God. Psalm 15 tells about the humble, plain-speaking person, not the sophisticated or proud, who enters God’s presence. In 1 Corinthians 1:18-31, Paul cuts through the fad-addiction of that community to tell them that “God’s foolishness is wiser than human wisdom.” The sermon is based on this passage. Finally, in Matthew 5:1-12, Jesus lays out the counter-intuitive heroes of the kingdom: the meek, the mourning, and the poor in Spirit.

Open with a trend you remember from growing up. Whether it was bell bottoms, oat bran, heavy metal music, or hot yoga, we’ve all taken part in trends. Tell stories and use pictures—the funnier, the better.

Fads. We’ve all taken part in them. We’ve all seen them come and go. Some are embarrassing and superficial (nose-piercing) and some are more far-reaching (political movements, meditation practices). Fads appeal to the universal urge to be “in the know” or part of the “it crowd,” or simply to do something fresh and new.

There are sometimes good motivation behind fads—trying to find some new idea or new spin on an old thing. But there’s one sure thing about fads—they pass. Andy Warhol’s famous statement about “fifteen minutes of fame” is a generously long estimation of our appetite for fashion, health trends, music, gadgets and any number of things.

Paul faced this as he addressed believers in Corinth. The Corinthians were enslaved to trends. New philosophers and religious and cults came through town every week there, and everybody was trying to be the “in crowd” and follow the “new thing.”

To fully understand Paul’s letter, you have to understand Corinth. If you’re from the US, you may remember only one reference to Corinth in modern culture. Thirty years ago, Ricardo Montalban sat next to an elegant couch in a Chrysler commercial and said, “Everyone asks—Corinthian leather?” 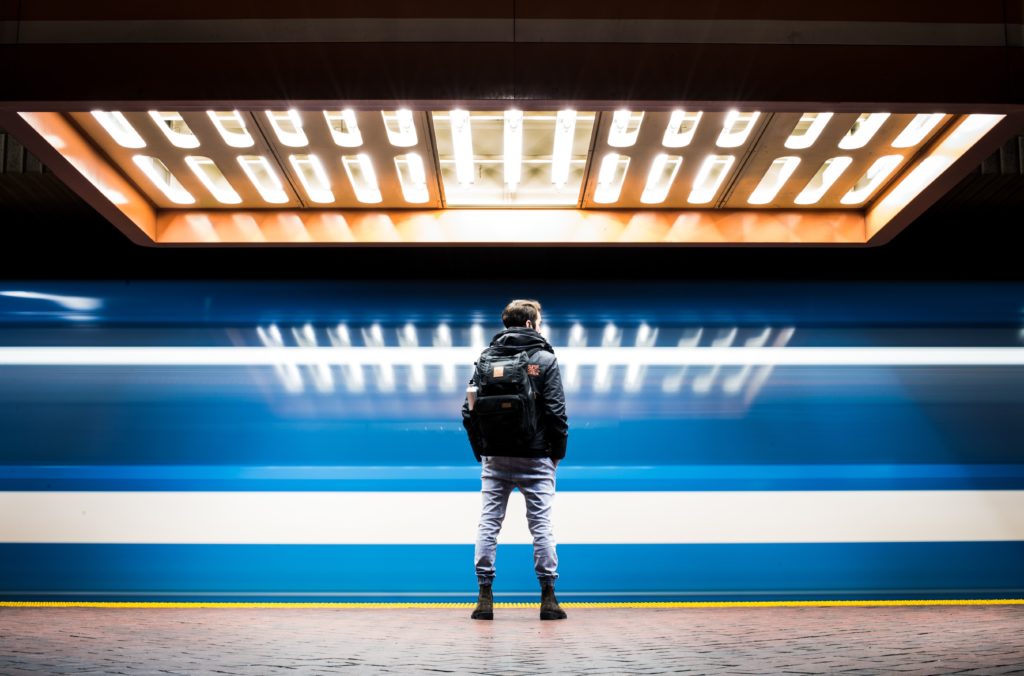 For many of us, that was the first time we heard the word Corinthian outside of church! On the commercial, it meant upper-class quality, in the ancient world, “Corinthian” was hardly a compliment.

So today let’s look at the first part of Paul’s letter to this fledgling church. We will look at three things:

At this point, either read or have someone read I Corinthians 1:18-31.

Corinth was a city not far from Athens and on the shores of the Mediterranean Sea. Unlike its stately urban neighbor, Corinth was a young city at the time of Paul’s writing. It had been built on smoking ruins just a few generations before, so the wealth was new, the culture was new, and the people didn’t have much of a heritage.

Corinth was a port city, and tradesmen from all over the known world would come through bringing their goods and wares, as well as their philosophies and religious ideas. You could find almost anything you wanted, and you could get into all kinds of different discussions and/or arguments.

You could make and lose money very quickly in Corinth. There was no such thing as a landed aristocracy of old money in this young city. Your status wasn’t determined by your heritage, but by your wealth. With money you could buy your way in and out of different points of view, whatever appealed to you at the time.

So, you have a young city, a busy city, a wealthy city, and a transient city. Let’s just say their moral choices were a little progressive. Promiscuity, drunkenness, and general license were part of life in Corinth. In the ancient world, the slur for wild, reckless partying was to “Corinthianize.” What happened in Corinth, stayed in Corinth. The Corinth lifestyle was wild, irresponsible—fun for a night, but in the morning came the hangover and the squabbling and backbiting.

So, the fads we talked about earlier were alive and well in Corinth. The latest everything came there—the good, the bad, the tired, the new. This translated into religion as well. In the midst of all of this, Paul planted a church. The church seemed to become obsessed with a “wisdom” that Paul keeps talking about. They’ve started to split off into different cliques—each trying to be more exclusive than the next.

The good news of the gospel is being chewed up and digested like every other new philosophy that appeared. They’re all trying to get to this great “wisdom,” whatever it is, and get a seat at the insider’s table.

These divisions and cliques constantly plague the human race, and we are no exception on the current day. Watch advertisements for five minutes. You’ll hear about being “first to do…” or “wear the latest…” or “we know you’re not like the others, come here…” If a copywriter really wants to really beef up a product they call it “exclusive” or “limited edition.”

Paul’s having none of it, and neither should we. He sees this one-upmanship for what it is—a symptom of sin. What’s his answer to everyone’s insider knowledge and exclusive wisdom and refined sophistication?

For since in the wisdom of God the world through its wisdom did not know him, God was pleased through the foolishness of what was preached to save those who believe. (I Corinthians 1:21)

Let’s back up a few verses:

For the message of the cross is foolishness to those who are perishing, but to us who are being saved it is the power of God. For it is written, “I will destroy the wisdom of the wise; the intelligence of the intelligent I will frustrate.” (1 Corinthians 1:18-19)

The cross was a shameful way to die. In that society, it was reserved for runaway slaves and political insurrectionists. These were not just people the authorities wanted dead; these were people they wanted on display. Don’t pull any of this stuff, or you’ll be next…

The idea of the cross being a piece of jewelry or a tattoo like it is today was laughable. That’s like wearing an electric chair or a rope noose as an accessory!

As far as political movements go, Jesus was a failure like all the other rebels before him. As far as becoming a pop culture figure or some kind of philosopher star, he was a joke. As far as the messianic hope for a military genius that would free his people, he was a total loss.

God played the fool in Christ. He chose the way of humiliation and love rather than exclusivism and one-upmanship. Instead of trying to be the smartest guy in the room, he took the place of what the world considers the fool.

Here’s a group of people looking for the most sophisticated, complex answer they can find, and Paul says the low and despised answer is the one. Rather than a flashy fad coming through town, rather than some conquering philosophy or god, this is the God who was conquered on the cross.

Even the substance of the answer of the gospel seems foolish. This isn’t some castle of philosophical inferences or abstract chain of logic; this is a bizarre story of state execution and a body that somehow came back from the dead. This also isn’t some wild, brain-numbing ceremony to curry favor with the far-off gods. The gospel is a transformative message that presses you into life rather than giving you an escape from it.

Translate that to our own time where fashions, trends and philosophies go by even faster because of technology and social media. The gospel is not another vague, sentimental feel-good philosophy that doesn’t demand anything. This isn’t Dr. Phil’s latest take-it-or-leave-it advice. Nor is the gospel a math formula you can put on a spreadsheet. It’s a weird story based on weirder circumstances that simply won’t go away.

The answer isn’t power, or secret knowledge, or sudden wealth. It’s the oldest answer in the book: love. Or as Paul said, “Now I will show you the most excellent way…”

The cliques appear because everyone is trying to be further in the in-crowd than everyone else. The cross and resurrection breaks these ancient rules of human selfishness so much so that it broke the rules of life and death and time and space.

The answer to this fractured group is community.

Just as breaking off in factions is the symptom of sin and selfishness, so community is the indicator that God is present and in charge.

I think we see this only in moments in this life: when everyone in the room is celebrated and loved, when no one is trying to win or be the center of attention. How sweet it is though, to be free of our ego’s demands for a while and enjoy others the way God enjoys them.

One great example of this is the life of Henri Nouwen—a priest, writer and professor. He wrote some modern spiritual classics and taught at the most sophisticated institutions in America: Harvard, Yale, etc. But he finally found home at the L’arche community—a residential facility for those with mental and developmental disabilities. He lived and worked there for the last ten years of his life, where he found the community of love he’d sought for decades.

He said of the bonds there:

I also realized that handicapped people didn’t love or care for me because I write books or take trips. They don’t know that. If they express love, it comes from God. When I came to L’Arche, my whole life was tired. But God said, “I love you. I want you to hold you.” Finally God had the chance to really hug me and lay divine hands onto my heart through this community. (Nouwen—The Road to Peace)

Nouwen had been on the inside of the in-crowd, the most sophisticated people on earth. He was internationally famous and had spoken before thousands. And where he finally found peace and found Jesus again was in the company of folks without the mental capacity to appreciate that. People who would have been called “fools” a hundred years ago. They didn’t care about Henri’s amazing career, they just loved him.

When he’s here, all are celebrated and no one is excluded from some special crowd. When Jesus is here, everyone is blessed.

By way of benediction, let’s read Paul’s discussion of “the most excellent way” in 1 Corinthians 13. As much as these words are read at weddings, they actually describe God and help us see the what true community can look like—and will look like when Jesus is in the room.

Read 1 Corinthians 13:1-13. The way you do this depends on your church community. The pastor could read it, or you could read it “in the round”—one verse per reader until you’re done. A more ambitious possibility is to chose a few readers. If possible, in the spirit of Paul’s words, have a diverse group of ages, races, disabilities, men/women.

There is a place for everyone – a unique, special place. Once we deeply trust that we ourselves are precious in God’s eyes, we are able to recognize the preciousness of others and their unique places in God’s heart. —Henri Nouwen