This week’s theme is Christmas—the celebration of the birth of Jesus. This message may be used either Christmas Eve or Christmas Day. It is recommended you give extra time for singing Christmas hymns. One method would be to alternate Christmas hymns with Scripture readings, or simply telling the story in your own words. There are numerous Christmas videos that will enhance your special service. Do a search but be sure to use only those allowed under your copyright license. The sermon is text heavy; you may want to assign different people to read different parts. Have them practice ahead of time for smooth transitions. 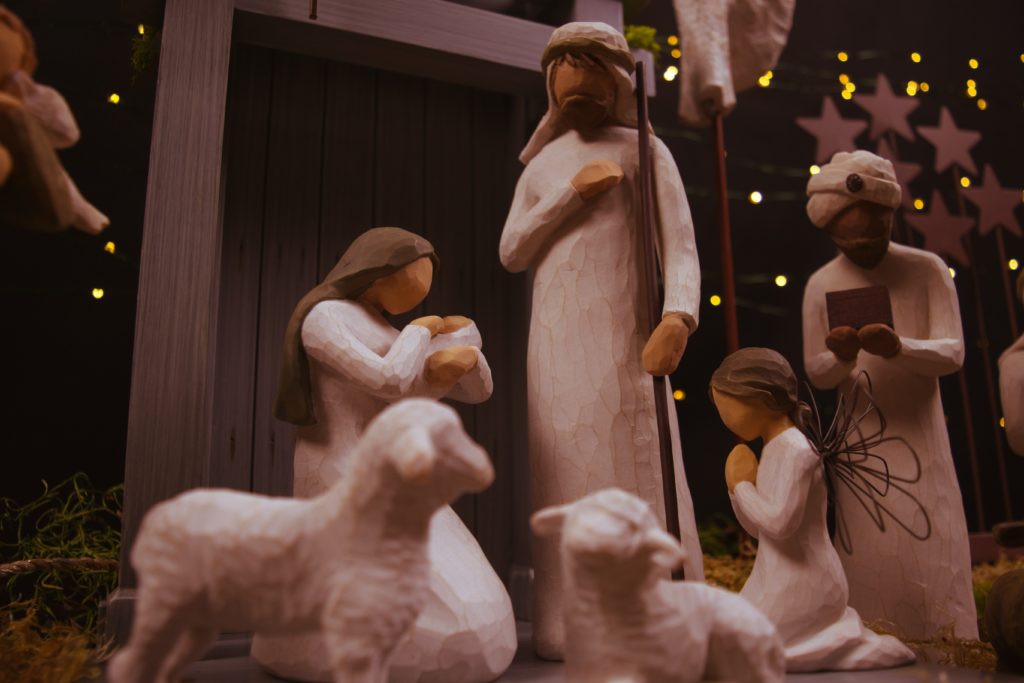 Read with enthusiasm and excitement:

The people who walked in darkness have seen a great light; those who lived in a land of deep darkness—on them light has shined. You have multiplied the nation, you have increased its joy; they rejoice before you as with joy at the harvest, as people exult when dividing plunder. For the yoke of their burden, and the bar across their shoulders, the rod of their oppressor, you have broken as on the day of Midian. For all the boots of the tramping warriors and all the garments rolled in blood shall be burned as fuel for the fire.

For a child has been born for us, a son given to us; authority rests upon his shoulders; and he is named Wonderful Counsellor, Mighty God, Everlasting Father, Prince of Peace. His authority shall grow continually, and there shall be endless peace for the throne of David and his kingdom. He will establish and uphold it with justice and with righteousness from this time onward and forevermore. The zeal of the Lord of hosts will do this. (Isaiah 9:2-7 NRSV)

Welcome to the greatest story ever told—the story of God becoming man. We call this story Christmas. Today we will worship in song as we go through the story celebrating the incarnation—when God became flesh.

In Luke 1 and 2 we find the story, which we will read from The Passion Translation:

During the sixth month of Elizabeth’s pregnancy, the angel Gabriel was sent from God’s presence to an unmarried girl named Mary, living in Nazareth, a village in Galilee. She was engaged to a man named Joseph, a true descendant of King David. Gabriel appeared to her and said, “Grace to you, young woman, for the Lord is with you and so you are anointed with great favor.”

This is the same message Christmas gives to each of us.

Mary was deeply troubled over the words of the angel and bewildered over what this may mean for her. But the angel reassured her, saying, “Do not yield to your fear, Mary, for the Lord has found delight in you and has chosen to surprise you with a wonderful gift. You will become pregnant with a baby boy, and you are to name him Jesus. He will be supreme and will be known as the Son of the Highest.

And the Lord God will enthrone him as King on his ancestor David’s throne. He will reign as King of Israel forever, and his reign will have no limit.”

Mary said, “But how could this happen? I am still a virgin!”

Gabriel answered, “The Spirit of Holiness will fall upon you and almighty God will spread his shadow of power over you in a cloud of glory!

This is why the child born to you will be holy, and he will be called the Son of God. What’s more, your aged aunt, Elizabeth, has also become pregnant with a son. The “barren one” is now in her sixth month. Not one promise from God is empty of power, for nothing is impossible with God!” (Luke 1:26-37 TPT)

Imagine the scene—a teenage Jewish girl who is betrothed to a young man named Joe, has her world turned upside down. She’s told she’s going to become pregnant before she gets married—without the consent of her fiancé. You can only imagine the thoughts going through her mind. But notice her reply:

“This is amazing! I will be a mother for the Lord! As his servant, I accept whatever he has for me. May everything you have told me come to pass.” And the angel left her. (Luke 1:38 TPT)

A few months later, Mary meets her cousin Elizabeth, who is also miraculously pregnant and will soon give birth to John, who will become John the Baptist. Both women praise God and Mary says a prayer, which is called Mary’s Song or Mary’s Magnficat – Magnificat is Latin for “Magnifies” – My Soul Magnifies the Lord. We’ve asked _____ to read this prayer.

Have someone read the Song of Mary.

My soul is ecstatic, overflowing with praises to God! My spirit bursts with joy over my life-giving God!  For he set his tender gaze upon me, his lowly servant girl. And from here on, everyone will know that I have been favored and blessed. The Mighty One has worked a mighty miracle for me; holy is his name!

Mercy kisses all his godly lovers, from one generation to the next.Mighty power flows from him to scatter all those who walk in pride. Powerful princes he tears from their thrones and he lifts up the lowly to take their place. Those who hunger for him will always be filled, but the smug and self-satisfied he will send away empty. Because he can never forget to show mercy, he has helped his chosen servant, Israel, keeping his promises to Abraham and to his descendants forever. (Luke 1:46-55 TPT)

We pick up the story in Luke 2.

During those days, the Roman emperor, Caesar Augustus, ordered that the first census be taken throughout his empire. Everyone had to travel to his or her hometown to complete the mandatory census. So Joseph and his fiancé, Mary, left Nazareth, a village in Galilee, and journeyed to their hometown in Judea, to the village of Bethlehem, King David’s ancient home. They were required to register there, since they were both direct descendants of David. Mary was pregnant and nearly ready to give birth.

When they arrived in Bethlehem, Mary went into labor, and there she gave birth to her firstborn son. After wrapping the newborn baby in strips of cloth, they laid him in a feeding trough since there was no available space in any upper room in the village. (Luke 2:1-6 TPT)

That night, in a field near Bethlehem, there were shepherds watching over their flocks. Suddenly, an angel of the Lord appeared in radiant splendor before them, lighting up the field with the blazing glory of God, and the shepherds were terrified!

But the angel reassured them, saying, “Don’t be afraid. For I have come to bring you good news, the most joyous news the world has ever heard! And it is for everyone everywhere! For today in Bethlehem a rescuer was born for you. He is the Lord Yahweh, the Messiah. You will recognize him by this miracle sign: You will find a baby wrapped in strips of cloth and lying in a feeding trough!”

Then all at once, a vast number of glorious angels appeared, the very armies of heaven! And they all praised God, singing:  “Glory to God in the highest realms of heaven!  For there is peace and a good hope given to the sons of men.” (Luke 2:8-14 TPT)

When the choir of angels disappeared back to heaven, the shepherds said to one another, “Let’s go! Let’s hurry and find this Word that is born in Bethlehem and see for ourselves what the Lord has revealed to us.” So they ran into the village and found their way to Mary and Joseph. And there was the baby, lying in a feeding trough.

Upon seeing this miraculous sign, the shepherds recounted what had just happened. Everyone who heard the shepherds’ story was astonished by what they were told. Mary treasured all these things in her heart and often pondered what they meant.

The shepherds returned to their flock, ecstatic over what had happened. They praised God and glorified him for all they had heard and seen for themselves, just like the angel had said. (Luke 2:15-20 TPT)

Christmas is Good News—Good news we should be excited about sharing with others. The disciples shared the story; it’s been shared generation to generation since. It is still being shared. We want others to know this good news. We should “Go Tell it on the Mountain”

Congregational Song “Go Tell it On the Mountain”