GCI Caribbean Nations Mission Developer Charles Fleming continues the series begun last month, now looking at the role the church has in facilitating a process that leads to worldview conversion.

How can we, under-shepherds of the Great Shepherd Jesus Christ, help our members understand the need many of them have for the conversion of their personal worldview into greater alignment with the mind of Christ? I’ve wrestled with that question since 2004, when I began seeing the need for the realignment of my own worldview.

The role of the church

As I wrestled, it became clear that the place to begin is with an understanding of the disciple-making mission given by Jesus to his church. Only then can we understand how discipling people includes helping them embrace a worldview that aligns with the mind of Christ rather than with the values, perspectives and assumptions of the dominant, secular culture.

Note what the apostle Peter wrote to Christians concerning this issue:

You are a chosen people, a royal priesthood, a holy nation, a people belonging to God, that you may declare the praises of him who called you out of darkness into his wonderful light. Once you were not a people, but now you are the people of God; once you had not received mercy, but now you have received mercy. Dear friends, I urge you, as aliens and strangers in the world, to abstain from sinful desires, which war against your soul. Live such good lives among the pagans that, though they accuse you of doing wrong, they may see your good deeds and glorify God on the day he visits us. (1 Pet. 2: 9-12)

As Scott McKnight points out in his commentary on 1 Peter, this passage is one of the earliest examples of an answer to a vital question: How are Christians to interact with society and culture? As McKnight notes, Peter’s letter sheds light on “one of the first struggles in the church with society” (The NIV Application Commentary: 1 Peter, p. 37).

The Christians Peter wrote to were being marginalized and even ridiculed by the society around them. More and more, they were being viewed as enemies of the culture’s vision of the good life. But what relevance does Peter’s advice to 1st-century Christians have for us in 21st-century Western culture? The answer is that it has a great deal of relevance. You see, there was a time when Western culture gave Christianity an honored, even favored position. But times have changed, and the leading Western culture-shaping institutions are now largely post-Christian, even anti-Christian. As a result, like the Christians Peter wrote to in the 1st century, Christians in the West today are both marginalized and ridiculed.

The need for renewal

It’s widely recognized that the church’s influence on the culture in the West today is small (and in many places, nearly non-existent). But that situation is not new. As many church historians note, when societal conditions favor Christianity, the church tends to become more conformed to the culture with the result being that its witness to the culture is weakened. But when the church is under duress, it tends to live closer to its calling from God, and its witness to the culture is strengthened. So, though many Christians decry the lack of Christian influence in Western culture today, there is hope for the church and its witness, just as there was in Peter’s day—if (and this is a big if) the church—perhaps even a small part of it—is renewed in its calling to be the redemptive presence of Jesus in the world.

The fruit of renewal

In the passage in 1 Peter quoted above, the apostle points out six ways Christians are renewed as individuals when the church as a whole is renewed in its calling:

It begins with us

As GCI pastors and ministry leaders, we might be thinking that it’s a tall order to lead our congregations in the sort of renewal Peter envisions. Where would we begin? My answer is that it starts with each of us seeking deeply personal answers to the following questions:

I encourage you to prayerfully discuss your answers to these questions with God. For me, doing so is a lifetime challenge—one that, from time-to-time, requires periods of focused reflection. It’s amazing how deep into our souls the influence of the dominant culture reaches!

Having experienced a certain degree of worldview conversion in our own lives, we can reach out to help our members examine the need they have for renewal. In some (many?) cases, that will mean modification (even radical transformation) to the worldview they now hold. To help you think about this challenge, here are some ideas to consider:

1. Help your members identify the cultural assumptions that are incompatible with a Christ-centered worldview. Gary Deddo lists several of these assumptions in his article in this issue. To follow through, we will need to educate ourselves concerning worldview issues. Hopefully, this series of articles in Equipper will help. You might also read some of the books and other resources being referenced in the series, and use them as  guide to research the topic for yourself on the internet.

If we fail to educate our members on these issues, they will tend to take what we preach and teach and cherry-pick the points that align with their current worldview—one that might be seriously at odds with the mind of Christ. Helping members attend to the conversion of their worldview is necessary, foundational work for us as pastors called to help facilitate the life-transformation Jesus offers his people by the Holy Spirit.

2. Develop a clear mental model as to what a worldview is. I find the diagram below to be helpful in assessing the influence our worldviews have on us. It shows the correlation between our values/beliefs and our worldview, helping us see where our actions and decisions come from. 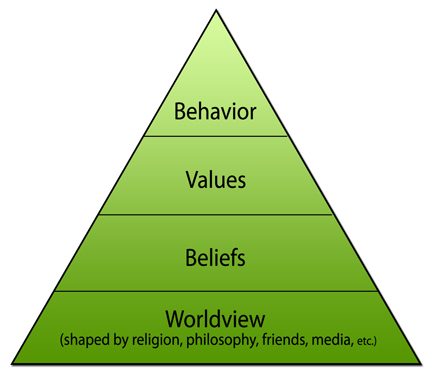 Note in the diagram that behavior, which is visible to others, is just the “tip of the iceberg.” Beneath it are what is less visible—the beliefs, values and perspectives that shape behavior. In some cases, we ourselves may act out of what might be called unconscious values, where things just “feel right” and we act accordingly. Undergirding all this—shaping and integrating our values and beliefs—is our worldview. Though it often goes unrecognized, it is a powerful force that determines how we view reality and thus how we think and act. As Gary Deddo points out in his article in this issue, a Christ-centered worldview is undergirded by a theological understanding, which is then undergirded by Scripture, with Jesus, the Living Word of God, being the cornerstone that undergirds it all (Eph. 2:20-21).

3. Use the diagram above to help you answer these questions:

4. Follow the steps below in helping your members assess which aspects of the prevailing secular worldview might be forming the worldview that currently prevails within your congregation:

3 thoughts on “Worldview Conversion: The Role of the Church”