United in Christ, we all reflect who God is. Whether it is evident to us or not, each of us is a conduit of grace with the ability to share God’s love and kindness with one another.

Speaking Of Life 3044 | How Enemies Become Friends Cara Garrity If you’re an animated movie fan, and I say, “To infinity and beyond!” you probably will immediately think of Buzz Lightyear from the movie Toy Story! In the movie, Buzz Lightyear was an astronaut toy character who was voiced by actor Tim Allen. If you remember the very first Toy Story, Buzz was the new toy that captured the boy Andy’s attention, leaving his old favorite, Woody the Cowboy, cast aside. Woody was understandably jealous, so at the beginning of the movie, Woody and Buzz were rivals. But it’s when they’re kidnapped by the nasty boy Sid that they realized they didn’t have to be enemies. Buzz and Woody needed to work together to escape Sid and get back to Andy. Their common goal fostered empathy and respect between the two. The gospel of Mark reports a similar type of story where the apostles saw others outside their group casting out demons in Jesus’ name, and they might have been a little jealous. Let’s read what happened: John said to him, “Teacher, we saw someone casting out demons in your name, and we tried to stop him, because he was not following us.” But Jesus said, “Do not stop him; for no one who does a deed of power in my name will be able soon afterward to speak evil of me. Whoever is not against us is for us. For truly I tell you, whoever gives you a cup of water to drink because you bear the name of Christ will by no means lose the reward. Mark 9:38-41 (NRSV) Jesus points out an important lesson, not just for the disciples but for us, too. Love and kindness have their roots in the Father, Son, and Holy Spirit, so when they’re expressed—even by those who don’t hold similar beliefs—they’re furthering the good news of God’s love for all humanity. In this context, Jesus is addressing those who were doing good works in his name.  We might think of the many different Christian denominations who often may disagree about some theological doctrines but who still love and serve the same God. Buzz Lightyear and Woody were united, at least at first, in their desire to get back to Andy, and as they worked together on that goal, they developed a relationship based on respect, empathy, and even love. Though some would like to restrict good works to their own understanding we’re encouraged to recognize how the Father, Son and Spirit infiltrate all aspects of creation. When we see love and kindness at work, we can rejoice because we know God is meeting the world’s needs and affirming humanity’s value, no matter who is doing the loving or showing the kindness. May you recognize God’s love and kindness in the world today, and may you pass it along. I’m Cara Garrity, Speaking of Life.

The theme this week is what God’s grace looks like in our world. American author and theologian Frederick Buechner (pronounced BEEK-ner) says that grace is like God saying to us, “Here is the world. Beautiful and terrible things will happen. Don’t be afraid. I am with you.” Psalm 124, our call to worship, reminds us that even when difficulties arise, we can be brave because God is supporting us. An example of this is found in Esther’s intervention on behalf of her people, as discussed in Esther 7 and 9, which was possible because she was willing to risk everything and do what needed to be done. Mark 9 reveals Jesus speaking strongly about our responsibility not to discourage one another, but rather, to support one another as we participate in showing loving kindness to others. Our sermon text, James 5, emphasizes the value of community, especially in response to suffering (our own and others’). James helps us understand the role of prayer in a world where beautiful and terrible things can and do happen, as well as the importance of leaving judgmental attitudes behind.

There was a young mother who had a son, her only child, and the toddler was the light of her life. The boy became ill and died, and the young mother was so distraught that she clasped the child’s body to her chest and refused to bury him. Though many tried to console her, she insisted that there had to be a cure for death, and that requiring a mother to give up her only child was too much to ask. Someone suggested that maybe the philosopher Buddha might know of a special herb that could restore life, so the grieving mother went to see him.

“Please tell me, dear teacher, how I might cure my grief and raise my boy to life,” she begged.

“I can make a tea for that,” he told her, “but it requires a very special ingredient.”

“Tell me, dear sir, and I will get it for you,” she pleaded.

“I must have a few mustard seeds,” he said, “but they have to come from a home that has never known loss or suffering.”

“I’ll find them!” she said, and she began to visit each home in all the nearby villages to find one that had never known loss or suffering and obtain a few mustard seeds to make the special tea. At each home she visited, she asked about their difficulties and sorrows. One home had lost a beloved spouse and another a parent. The next homes had lost grandparents, favorite aunts and uncles, even pets. They had suffered crippling disease, loss of crops, and hunger. The grieving young mother sat with each one and listened to their stories, sometimes sharing her own story of losing her son. After she had visited each home, she found that there was no one who was unaffected by suffering. The mother buried her son in the forest and went back to see the philosopher.

“Do you have the mustard seeds?” he asked her.

“I visited every home to see if there were any mustard seeds in those homes untouched by suffering,” she said. “I found plenty of mustard seeds, but there were no homes that were without suffering and loss. What I found in the midst of their suffering was comfort for my own grief as well as comfort I could offer them because I had suffered, too.” 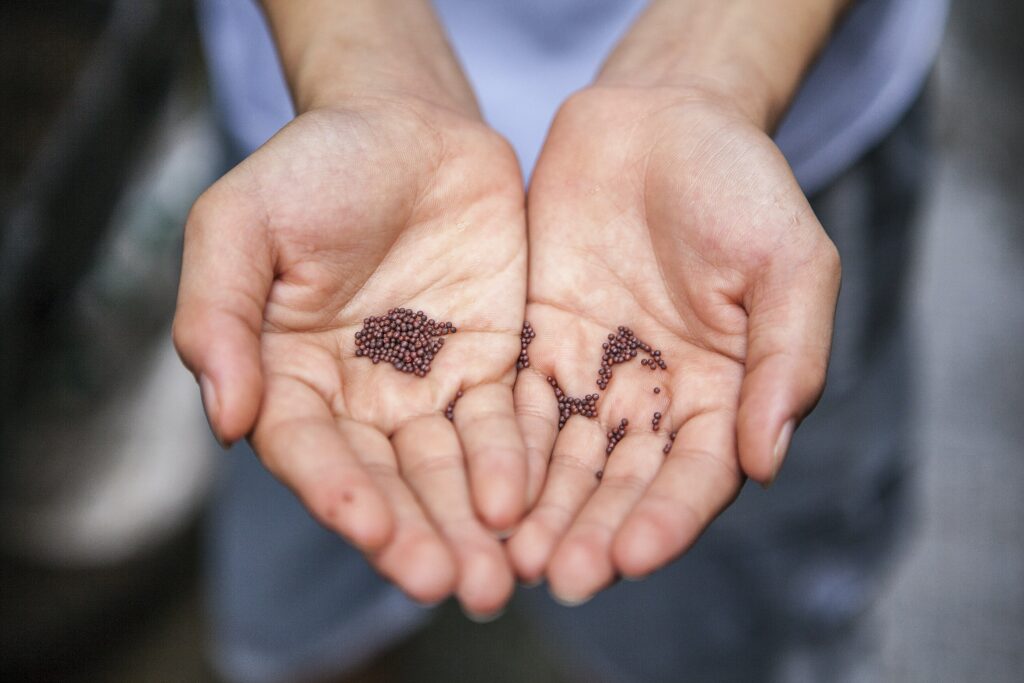 In this case, the mustard seed was an excuse to get the grieving mother to talk to others and understand that suffering and loss are a part of living in this world. As the American writer and theologian Frederick Buechner (pronounced BEEK-ner) says in his definition of what God’s grace looks like in the world, “Beautiful and terrible things will happen. Don’t be afraid. I am with you.”

As Christians, we wonder about our role in being “with” people as God’s hands and feet. Our scripture reading from James 5:13-20 helps us understand our role as participants in extending God’s grace and comfort to ourselves and others.

What can we notice about this passage?

Verse 14 recommends asking for prayer if one is sick, including being anointed with oil. Once again, prayer and especially prayer for healing is not a one-person, solitary activity. An interesting point is that olive oil was not always available to the poorest of Christians, and so James may be emphasizing the need for wealthier Christians to make oil (known for its healthful properties) available to those who could not afford it.

The last part of v. 15 can also be confusing, making it sound as if sin and illness are connected. If we stop to think about it, we can all think of instances where illness just happens, and assigning blame is never productive or helpful, especially to the person who is suffering. The second part of v. 15 can make it sound as if we are the ones to forgive to sins. This part is closely tied to v. 16 in that James encourages us to “confess [our] sins to one another.” The idea of prayer and confession being closely linked is not a new one. How can you pray for someone if they are not being honest and authentic about their struggles? However, one must use discretion and approach the practice of confession with caution, as not every Christian is able to shoulder another person’s struggles. We all at times have more to bear than we have capacity for, and it is not fair to ask someone who is already weighed down to support our struggle, too. Consulting with a church pastor, a licensed counselor, or therapist are all appropriate steps to take, depending on the issue.

At the end of v. 16, James is acknowledging the power of communal prayer while emphasizing that our own personal relationship with God must not be neglected. Unless we are centered and clear about who we are in Christ, we lack the depth of connection we need to effectively intercede on behalf of others.

Sheri Salata has written a book called The Beautiful No: And Other Tales of Trial, Transcendence, and Transformation, and in it, she writes about her life in hindsight, noting how closed doors often led her to another path, ultimately leading her to become the producer of the Oprah TV show. If we think about it, we’ve all had our own “beautiful no’s” when a closed door seemed life-shattering but eventually turned out. Sometimes “beautiful no’s” won’t make sense during our lifetime, and it’s there that we trust in God’s goodness and love, knowing we are treasured and held in his everlasting arms.

James is reminding us to love and support each other. Loving and listening to a sinner is often the thing that brings them back. We can stand by and support the person without supporting the behavior or attitude. We can offer advice when it is asked. The best advice is that which is asked for (not simply offered) and spoken with a humble and caring attitude. Most of us want to be the “savior” or the person who brings the wanderer back, but few realize that we all wander more than we are willing to admit. Sometimes sharing our own wandering helps. Even as the Israelites wandered in the desert for forty years, so sometimes our faith journeys take a more circuitous than direct path. Being transparent with each other helps everyone grow together. Our own journey allows us to share that God is faithful as our faith evolves and grows.

Even as the grieving mother in the Buddhist mustard seed parable learned that suffering and loss are best handled in community, so our scripture passage in James emphasizes the importance of prayer as a means of building strong relationships and expressing God’s grace in this world where “beautiful and terrible things” happen. While we can’t always explain why terrible losses and suffering occur, we recognize our limited human perspective and trust in God’s continuous presence and goodness, knowing we’re supported by our community of faith.

If you get a chance to rate and review the show, that helps a lot. And invite your fellow preachers and Bible lovers to join us!

Follow us on Spotify, Google Podcast, and Apple Podcasts.

From Speaking of Life