The theme for this week is “I will show you.” In Genesis 12, God asks Abram to walk away from all he knew into a land where he would show Abram how amazing the future will be. In Psalm 121, the poet is encouraging himself that God will show him his provision, protection and love if he steps out in faith. In Romans 4, Paul shows us God’s overarching plan to connect Abraham’s faith with our own as Christ followers. In John 3, Jesus confronts Nicodemus with the fact that the rabbi doesn’t already know the truth about God; it must be shown to him.

Nicodemus was a good guy. I think it’s important to know that. Nicodemus was ethical, trustworthy, highly religious, fiercely intellectual and knew his Old Testament better than any of us ever will. You dreamed your daughter would marry someone like Nicodemus.

He was well-connected and served on the ruling council. So he wasn’t just in the religious institutions, but also the local government. He’d done the world a lot of good.

He’d also seen guys kind of like Jesus before. They appeared once in a while, whipped the people into a froth, and gained a following. If these rebel leaders made trouble for Rome and didn’t calm down, they had a way of ending up on the crosses outside of town.

These miracles that Jesus did? Well, those were hard to explain, but… he’d figure something out. Nicodemus couldn’t watch it again: the disappointed people, the swift maintenance of Roman power and the young revolutionary bleeding out on a stake.

He was on his way to talk face-to-face with this firebrand to see if they could find common ground and come to some kind of peaceable solution. No more bloodshed, please. 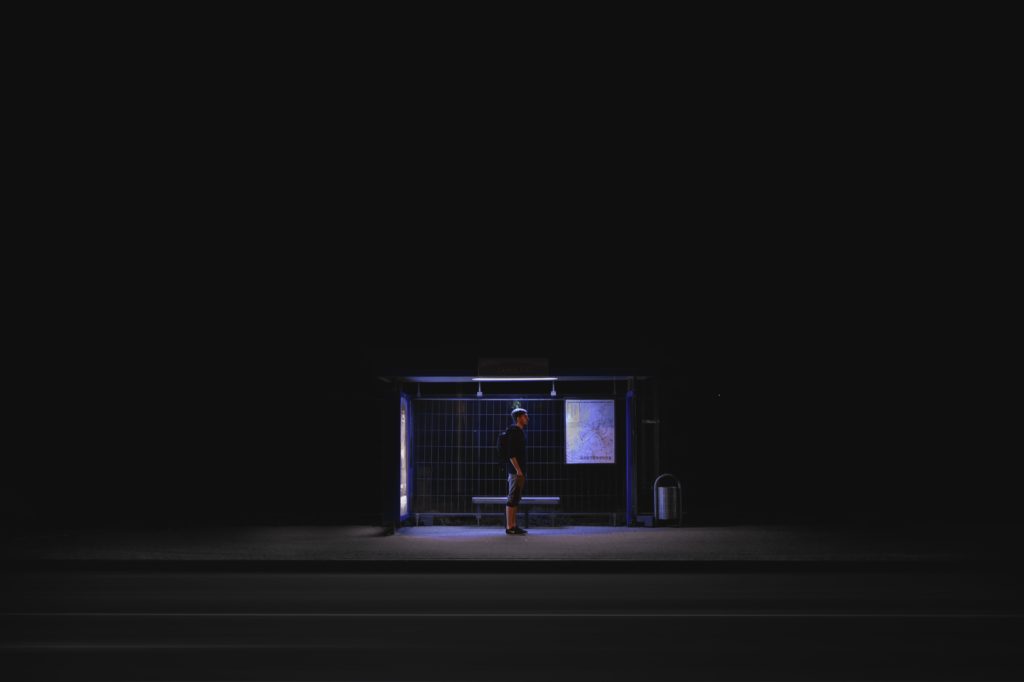 Let’s look at three things in the arc of Nicodemus’s story of meeting and knowing Jesus. Let’s look at this progression through the traditional parts of a story.

—Act two: rising action—what does Jesus talk with him about?

—Act three: resolution—we get one more glimpse of Nicodemus near the end of the Gospel. Is he a different man?

Now there was a man of the Pharisees named Nicodemus, a ruler of the Jews. This man came to Jesus by night. (John 3:1 ESV)

Here’s the exposition on Nicodemus. We’ve already talked about him being a good man, an upstanding man. He’s also in local politics. He’s a diplomat and essentially he’s going out as envoy to try to get this movement to stop before people get hurt.

The setting is always important in John’s Gospel. Darkness is the symbol of confusion, misunderstanding and sin. John includes this detail here to show us that Nicodemus is misunderstanding and lost—trying to fit Jesus into an old paradigm. Contrast this with the woman at the well in the next chapter who meets Jesus at high noon.

“Rabbi, we know that you are a teacher come from God, for no one can do these signs that you do unless God is with him.” Jesus answered him, “Truly, truly, I say to you, unless one is born again he cannot see the kingdom of God.” (John 3:2-3 ESV)

Nicodemus approaches Jesus like anyone would in this situation. This isn’t undue, smarmy flattery—it’s standard protocol. He’s approaching Jesus like any nervous city official would: “I just want to say I have the utmost respect for you, but…”

The problem, of course, is that Jesus isn’t standard. He’s not interested in finding some common ground and keeping the delicate peace in place.

He’s completing the story of God’s work with Israel, and by that right, all of humanity.

Jesus’ first move is to turn the dial all the way up on the conversation—this is not protocol, and no amount of law-keeping and tradition will take you as far as you need to go. You need to be born again. You don’t need medication and physical therapy; you need a transplant. You don’t need to course correct, you need to start over.

Pause here. When you hear the phrase “born again,” especially in American culture, what do you think of? Dramatic conversion stories of drug addicts and criminals finding their way? Someone immoral, ne’er-do-well, living in dysfunction and chaos who finally finds order? Or do we think of radically secular people coming to believe in something?

Nicodemus fits none of those notions! He is one of the most moral, religious, upstanding, intellectual, tax-paying citizens you’ll ever meet, and yet Jesus tells him he needs to be born again. He needs to start over. The answer is not within you, it comes from outside.

This brings us from exposition to act two—rising action.

Jesus answered him, “Truly, truly, I say to you, unless one is born again he cannot see the kingdom of God.” (John 3:3 ESV)

This phrase “born again” is a favorite label for describing Christians. But it’s actually a pun. There’s a double meaning in the original language—born again/born from above. It seems that Nicodemus misses this on the first go-round— you mean my mom has to give birth to me again?!

Jesus utilizes this double meaning to say you have to be born from above. True knowledge of God is from God—it’s not something you can attain through study and hard work or through your heritage—all things that Nicodemus has tried.

Jesus even refers to a story whose central action is looking up. In Numbers 21, there’s a strange story of poisonous snakes biting the Israelites. Moses made a bronze serpent, put it on a pole and everyone who looked up at it was healed. Jesus refers to this:

“And as Moses lifted up the serpent in the wilderness, so must the Son of Man be lifted up, that whoever believes in him may have eternal life.” (John 3:14-15 ESV)

The poisoned people had to look up, outside of themselves. Just as the connection between healing and looking at a piece of metal on a pole was mysterious, so our healing that comes through the cross is mysterious. And yet it’s what we need. The poison of sin is too powerful, and it’s nothing we can heal on our own.

Jesus refers to another Old Testament passage in verse 5:

Truly, truly, I say to you, unless one is born of water and the Spirit, he cannot enter the kingdom of God. (John 3:5 ESV)

The phrase “water and the Spirit” refers to places like Isaiah 44:3:

For I will pour water on the thirsty land, and streams on the dry ground; I will pour my Spirit upon your offspring, and my blessing on your descendants. (ESV)

The metaphor of water—bringing back the growth of Eden to the desert—is used over and over of God’s presence.

As the Spirit hovered over the waters in the creation story, so we must be recreated by God in Christ. The Law, which Nicodemus knows so well, was meant to prefigure Christ. Now that Jesus has come, the work of the Law is complete and the new heart and new Spirit is available to everyone who “looks up.”

After this conversation, Nicodemus kind of disappears. He appears briefly in John 7 to speak a line and then vanishes until the end.

Resolution is the closing act in which the tension of the story resolves. The hero rides off into the sunset. The guy gets the girl. Harry meets Sally.

In the story arc of Nicodemus, we’ve seen a well-heeled official meet with a rebel and essentially get a theological dressing down. Again, contrast this story with the next one over—the woman at the well. This is Jesus’ longest recorded conversation, and he spent it with a cultural and social “nobody.” His conversation with Nicodemus is confrontational and short. His next conversation, with a Roman centurion, is one blunt line that includes a command.

Jesus isn’t good at winning friends and influencing people in authority! He meets with a cultural-religious figure and confronts him. He meets with a military leader and dismisses him. Then he spends all his time with this forgotten Samaritan woman at the well. We see his true heart for the lost and lonely.

But what about Nicodemus? What about this diplomat rabbi who came to Jesus by night? We essentially don’t see him again until his resolution, when Jesus dies.

Nicodemus also, who earlier had come to Jesus by night, came bringing a mixture of myrrh and aloes, about seventy-five pounds in weight. (John 19:39 ESV)

Here we see Joseph of Arimathea and Nicodemus dressing the body of Jesus. This was the work of women and slaves—not men and definitely not men of influence. We see a glimpse of Nicodemus’s resolution. He stands freer than ever of all his cultural baggage, even able to carry the label of the one who “came by night.”

He can rest and stand free. His identity is in Christ, even though he doesn’t understand all that means in the moment, but he’s beginning to see that release and true joy. He came out at first at night, probably trying his best to protect his reputation. The last time we see him is publicly doing the work of those considered the lowest in that society.

So what’s your story? What will be your exposition, rising action and resolution?

For many of us, our exposition is like Nicodemus. He was generally a good guy—plays Parks and Rec softball, has a strong handshake, raises good kids.

But then Jesus comes along and messes all that up. No matter what the ground of our lives looks like, he turns the soil, he pulls up the old, tired roots.

In Act Two—the rising action—he tells us that even we need to be born again. Life as we know it seems to ring hollow and the old sins—even the “everyday” boring ones—offer less and less satisfaction. You start to see the people around you, even your rivals and enemies, as three-dimensional human beings.

You are being born again, from above.

For the writer of “Amazing Grace,” John Newton, it meant that he had to leave the slave trade—he couldn’t do it anymore. For Chuck Colson, Washington insider involved in Watergate, to be born from above was to leave that life and use his gifts for ministry. So many of us can point to these moments where something… just… happened and life was never the same.

This is where the conflict of the story is for Nicodemus. Jesus came with a new birth, not a political revolution, not military victory. He didn’t come to call everyone back to the Law again, but to tell them the kingdom was already here.

And what will be your resolution? How will the tension in your story resolve?

For Nicodemus, it was the joyful freedom to do work that was “beneath” him to honor his friend. For John the Baptist, it was stepping to the side knowing that he had prepared the way. For Peter, it was taking on the role of a clear-headed leader after he’d followed his wild moods his whole life and thought with his gut.

They were forever changed after meeting with Jesus.

Exposition, rising action, resolution. No doubt we will go through this story arc many times in our adventure with Jesus, the author and perfecter of our faith.