This article is from Regional Pastor Rick Shallenberger. Rick works with pastors and congregations in the upper Midwest and also serves as a contributing editor for Equipper.

Both CCC and CFC moved to new locations within the past three years. Previous attempts to get involved in their local communities hadn’t been successful and their respective teams spent a good bit of time in prayer asking God to lead them to where they could participate in what he was doing. CCC felt led to the community of Milford and CFC was led to a new location in the Western Hills area of Cincinnati.

God provided both pastors with “a man of peace” (Luke 10:5-9), helping them meet the community leaders and people who were gifted to help them start new ministries. For CCC, the man of peace turned out to be the superintendent of the school system. “I was telling the congregation about my prayers to meet community leaders,” said pastor George, “and after services, a man came up to me and said he knew the superintendent and would be happy to introduce us.”

That introduction opened several doors for pastor George and CCC, and brought several community leaders together to establish what they call, “Community United.” Pastor George chairs the meetings and said he is “overwhelmed and blown away by the opportunities God has opened up.” CCC is located in Clermont county Ohio—the fifth worst county in the nation for opiate overdose deaths per capita. “Community United” is dedicated to tackling this problem head on. One way is by working with youth leaders in the churches, schools, Girl and Boy Scouts, and in the community to resource them and encourage and affirm them that what they are doing is important and valued. CCC is helping sponsor a community event in April specifically directed toward youth workers.

Pastor George said it was clear to him and his leadership team that God was paving the way for their move to Milford. “We sensed this is where God wanted us, so our prayer was ‘Lord, what do you have in mind and how can we participate with you?’” One of the places they felt led to is an apartment complex near the church. “We felt it was a good place to start, and enabled us to be more focused” said Pastor George. “We had a Christmas party for the kids in the complex and 36 kids came, as well as several adults. We are excited to see what God has in store for the future.”

CCC is currently working on a new vision statement. “Our vision statement got us through the transition to our new location,” George said, “but it’s been clear we need to make it more outward focused.” Part of the renewal process for CCC was believing that God has a mission for the congregation and expecting God to make it clear. “We are willing to take risks,” said pastor George, “but when you believe God is leading you, risk isn’t the dominant concern. We have a growing expectation of what God is going to do.” 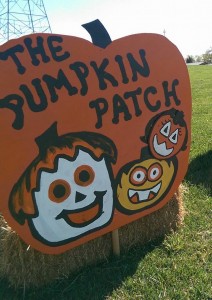 Pastor Dustin and his team at CFC have started a number of new missions and ministries as a result of their move to their new location. Last fall they sponsored a “pumpkin patch” for several weeks. Not only did they sell pumpkins for the fall season (as a fund raiser), they had several ways they used the patch to meet people in the community and thus make multiple connections. CFC also sponsored an “Outside the Walls” event the last weekend in October, and started an Awana club for children which meets during the week. Dustin and team have gone door-to-door in the immediate community to meet people and find out how they can best serve them. In the story below he shares the result of one of the door-to-door greetings.

How Much Does the Church Matter?

In the typical church, we believe in a good and big God of love. We believe God can do all things, and all is settled with Christ. We look out on the world and see the pain many experience and we complain about the government and the culture. We call the world guilty and the church forgiven. We then stay in our collective cocoons and hope the world does something to fix the world. How much does the church really matter in this world?

At Christ Fellowship Church in Cincinnati, like many GCI congregations, we have come to believe that Christ loves the orphans, widows, and sinners and that we have a calling to be amongst them. Why? Because we are “them.” But in the church we have a special name over our brokenness and that is “beloved, forgiven child of God.” This glorious name has inspired us to walk with boldness, with unveiled faces sharing this treasure because of Christ’s extraordinary power at work in us!

So rather than tell of “great things,” I would rather share the story of one person impacted by Christ’s ministry through our church.

Four months ago, my friend Tyler and I were walking through our local neighborhood inviting those we met to our church’s Fall Festival, which would take place in two weeks. Part way through our journey we met a woman named Karyn. Karyn was a magnificent lady to speak to, in a fine house, in a peaceful neighborhood. Tyler and I spent about 15 minutes talking to her about life, faith and our church. We then prayed with her. As we parted ways, we all cried tears of unexplainable joy knowing that God had brought us together.

Karyn didn’t wait two weeks until our festival. She came and helped us set up and run the festival! She attended church every week and joined our women’s small group. But the story of Karyn is so much more than her “coming to church and getting involved.”

Karyn is now a part of my family. She is there for us and we are there for her. Karyn knows where we are, in town or out. We know where Karyn is. She is leaving on vacation this week, and she called the other day just to tell us that she was going to miss us while she’s gone! Karyn, my wife, my kids, our church, are now united in Christ with joy unspeakable.

This connection of our church, forgiven by Christ, brought us together with a woman who was waiting for something but didn’t know what. The resulting forgiveness was experienced, and this led to spiritual joy. The fruit we now experience in being in mission together is the miracle.

We have learned from this. Jesus Christ and his church are in this world and we are called to confidently go into it and share the love with which he first loved us. If the church will obey his call, it will not only matter, it will make all the difference in the world for every “Karyn” that we come into contact with!